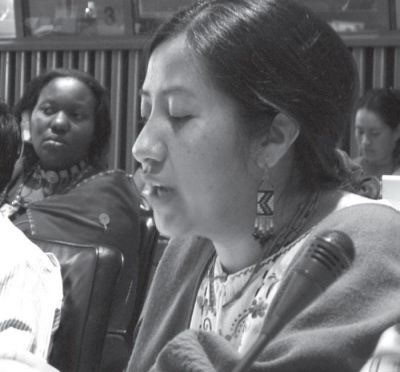 In the massive half-moon shaped United Nations conference auditorium filled with hundreds of individuals robed in colorful traditional clothing, jewerly and ceremonial items, a young female’s voice echoes from the center of the room.

“We indigenous peoples are emphatic in stating that those primarily responsible for climate change are the governments and companies of the industrialized world,” said Edith Bastidas, executive director of the Centro de Cooperación al Indígena in Bolivia, during a day of testimonies April 22. “[They] are encouraging a production and consumption model that is destroying the biodiversity and natural resources of our Mother Earth.”

More than 2,500 delegates have gathered in New York from April 21 to May 2 for the Seventh Session of the United Nations Permanent Forum on Indigenous Issues to discuss not only how climate change is affecting indigenous populations from the Arctic to Oceania, but also to highlight that real solutions to the problem will come from these very communities. It is estimated that there are 300 to 500 million indigenous people living in 70 countries worldwide.

Native communities testify that they are least responsible for causing the global environmental crisis. “The resources taken from our homelands are the four elements of the Creators — land, air, water and sun or spirit … which are taken for exploitation and money,” said Larson Bill, with the Western Shoshone Defense Project. “Global warming is the result of the misuse of the four sacred elements for life, used in a bad way, not the indigenous way.”

The United Nations has become increasingly visible in the climate change debate following the release of a ground-breaking four-part report in 2007 by the Intergovernmental Panel on Climate Change (IPCC) that identified the burning of fossil fuels (oil, gas, liquid natural gas and coal) as the primary cause in the increase of average worldwide temperatures by 1 degree Fahrenheit over the course
of the 20th century. Temperature increases are expected to accelerate this century if nothing is done to reverse current trends.

Many indigenous delegates stated their concerns about being left out of important negotiations in the past, such as the U.N. Framework Convention on Climate Change and the Kyoto Protocol. They demand that Native peoples have a leading role in future discussions, pointing to provisions in the Declaration on the Rights of Indigenous People, which was adopted last year by the United Nations.

“Indigenous peoples have experienced not only the effects of climate change most dramatically, but they have borne the brunt of misguided mitigation measures,” said Patricia Cochran, an Inupiat Eskimo from Alaska, in a statement from the Arctic Caucus. “How else does one explain the numerous examples of hydropower plants flooding our lands, sprawling windmill farms interfering with our reindeer-herding areas, geothermal power plants displacing our sacred sites and the biofuel crisis?”

“Our cultures are in crisis,” added Casey Camp Horinek of the Ponca Nation of Oklahoma. “The inability of governments to address the issue of climate change is tantamount to cultural genocide for our peoples.”

An indigenous-organized summit on climate change is being planned for 2009.