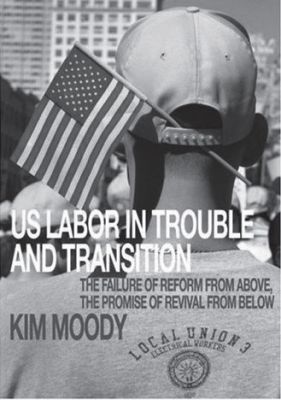 U.S. Labor in Trouble and Transition
By Kim Moody
Verso, 2007

Kim Moody’s recent U.S. Labor in Trouble and Transition is planted in a history of the suicidal tendencies of the American Labor movement. Eschewing the popular “valiant fighters against all-powerful capitalists” narrative, Moody makes a solid case that union problems are often union problems.

In one example, Moody digs into the seventies-era crises of capital and excavates the wave of contract concessions. Beginning in New York City’s public sector in 1975, he writes, “The unions not only made wage concessions and eventually put their pension fund up for ransom, but formalized the idea that future wage increases would be tied to productivity gains.”

This co-optation of union leaders abuts directly on their cowardly rejection of shop floor militancy. As dissident and reform movements within the unions fought hard for greater gains and against tepid bureaucratized union leadership, the leadership wrestled for control and saw the radical demands as part and parcel with the democratization efforts. Wildcat strikes were extinguished and resistance was seen as futile: Union presidents of the seventies seemed to be of one mind with the bosses. The effect looks like a death spiral as union membership dwindled and workers’ conditions deteriorated. Moody’s recounting of this reads like an enthusiastic textbook, and his passion bleeds through the charts and hard data, but he loses focus when confronting the present. As co-founder of the Trotskyite journal Labor Notes, Moody has been covering union activist movements for decades. While he was a union organizer in the sixties, his predominant work has been as a journalist and academic, creating spaces for union reformers to strategize.

This is good until it tempts the maxim “those that can’t do, teach.”

Moody’s criticism of the Service Employees International Union betrays the limitations of his vision and weighs on the book like an ulcer. SEIU, the country’s largest union, is portrayed as a bad example of top-down reform and highflowing rhetoric. Over the last two decades, from the presidencies of John Sweeney, which was a mixed era of transition with some honest achievements, to the current age of Andrew Stern, SEIU became the model of change: sacking inept and corrupt leaders like 32BJ’s Gus Bevona, mobilizing and hiring thousands of SEIU members to work on the 2004 election, and rebuilding locals centered around organizing and member training. The numbers don’t lie: As unions across the country have weakened, SEIU has doubled in size under Stern. Further, they’re one of the only unions preparing to take on the final frontier, consensed upon by Moody and everyone else: Wal- Mart and the American South.

Today’s SEIU isn’t above criticism, but Moody’s highest good seems to be not rebuilding union power and democracy on the shop floor, but democracy internal to the union. Moody may champion grassroots militancy and claim to recognize the brute power of corporate globalization, but he’s dismissive of strategic thinking that cuts the IWW aesthetic, understands the herds on Wall Street and speaks the language of Main Street. Unions are mass organizations; the union shop is one in which every worker is a member of the union and critical to its power and potential. Moody writes as an outsider who associates with the most radical elements, and it flavors his entire analysis: that the workers are radical and that the union bureaucracy just holds the revolutionary fervor back. This is, to be plain, out of touch with the reality of the working class today. And the reader, who may gain some from Moody’s descriptions of the past, should be careful not to give equal weight to his flawed prescriptions for the future.