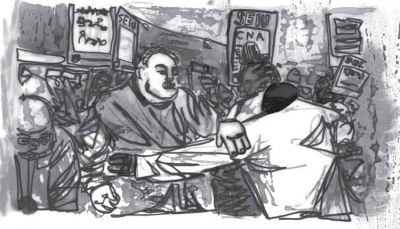 Up to six busloads of Service Employees International Union (SEIU) organizers and members started a scrum inside the lobby of a hotel holding the Labor Notes Conference in Dearborn, Mich., on April 12. Labor Notes is a monthly progressive and union democracy journal. The SEIU group wanted to disrupt the banquet hall dinner where California Nurses Association (CNA) leaders, who SEIU accuses of busting an Ohio union drive, addressed 800 conference participants from various unions.

“They [SEIU protestors] were banging on the doors like a marching band base drum. Real quick they rushed through the door,” said Roland Day, a unionized dockworker from Baltimore.

In the lobby, Day said that he and dozens of other conference participants formed a human chain in the attempt to stop the SEIU rush, but ended up clashing with organizers Frank Hornick and Rachel Holland who were accompanied by a horde, hundreds thick, of purple t-shirt-clad SEIU protestors.

“I tried to stop the big guy and was holding him back with all I had,” Day said.

Hornick, the 6’4” son of miner, said he had worked on the three-year campaign to organize more than 8,000 healthcare workers at Ohio based Catholic Healthcare Partners (CHP) facilities. He explained how CNA organizers had descended on the campaign’s March 2008 culmination to encourage nurses and other workers to vote against affiliating with the SEIU. The election was cancelled before going to a vote. The CNA has begun to organize nurses nationally, competing with SEIU for members.

“Our intent was to educate the conference; they knew what we were there for,” Hornick said. Holland, a petit 5’4”, told The Indypendent she sustained hand cuts and was “football tackled” by a conference participant and that SEIU’s goal was to “draw to light union-busting by unions.”

Things quickly got out of control in the lobby, as fliers spilled to the floor and a cacophony of chants, noisemakers and screams ensued from the SEIU group’s push towards the banquet doors.

“SEIU should hold their head in shame. Some of their people had purple bandanas over their face like the anarchists at WTO protests,” said Frank Halstead, a California Teamster.

In the midst of the donnybrook, retired union member Dianne Feeley was shoved to the floor by a SEIU member and hit her head on a the end of a table requiring stitches.

“I don’t feel the person did it on purpose,” Feeley said. Feeley commented she didn’t think many in the SEIU crowd knew they were protesting at a labor solidarity conference.

A BATTLE FOR THE NURSES

Central to the SEIU-CNA dispute are accusations by both organizations of raiding each other’s members and campaigns, and disagreements about the direction of the labor movement. The CNA is a mix of progressive politics — empowering female nurses to take on Republican politicians for the public interest — and old style unionism. The CNA only organizes nurses, prompting cries of elitism from the SEIU, which organizes healthcare professionals including nurses and technical workers, but also health aides and other service workers. The SEIU is almost singular in its mission, organize workers at all costs, and provokes criticism for its consolidation of smaller locals into mega unions and that it is autocratic and top down.

With the Ohio health care chain, the SEIU signed an election agreement where management agreed to be neutral and not to coerce workers against the union and SEIU would not run a traditional union drive. The SEIU had employed traditional organizing tactics for three years — running a campaign against the employer while rallying workers — but still couldn’t overcome CHP’s anti-union campaign.

“When you see a worker at a captive audience meeting, you’ll see how scared they are,” said Hornick, referring to an employer mandated anti-union meeting.

“When the employer agrees not to run an anti-union campaign, that’s historic,” Jennifer Farmer a SEIU spokesperson said.

But the devil is often in the details and in other neutrality agreements with employers, the CNA and even some SEIU locals accuse SEIU of selling out the workforce and the public interest. Furthermore, the CNA distributes literature with SEIU President Andy Stern on the cover of trade magazine Human Relations Outsourcing Today talking about how companies can outsource their labor relations to unions, arguing that unions be hiring halls a practice that has long existed in some industries.

“Their vision to grow is focused on signing agreements with corporate employers, essentially agreeing to anything,” Charles Idelson, CNA spokesperson said, referring to SEIU’s push to gain more members.

In California, the SEIU negotiated an agreement (now expired) with the nursing home industry that brought the union thousands of members but also included provisions against workers reporting bad employer practices to authorities and the union agreed to lobby for tort reform favorable to the nursing homes.

The feud is only getting worse. The CNA obtained a temporary restraining order against the SEIU April 16 for following the association’s members around the country to picket them. SEIU, however, got the order dismissed April 21. Both unions have competing websites that bash each other and seem willing to further escalate the battle with no mediation in sight.

Bennett Baumer is a member of the United Auto Workers (UAW) and a former SEIU organizer.