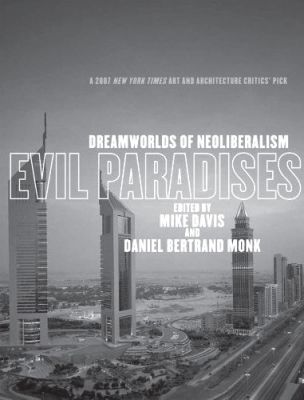 From Times Square’s transformation into Disneyland East and the gated housing complexes of Johannesburg to faux So-Cal suburbs in China and built-to-order private islands in Dubai, playgrounds of the privileged have been popping up at a dizzying rate across the globe. The one-sided class war called neoliberalism is generally understood as the transformation of global economic and political structures over the past three decades, redistributing wealth upwards within and between countries. But, as shown in Evil Paradises, it has equally been a transformation of space, creating zones of prosperity with one hand — and slums with the other.

In a series of trenchant articles, diverse in approach and focus, a crew of radical journalists, academics and urbanists attempt to map the contours of these contemporary “variations on a theme park.” This effort serves as a complement in a minor key to coeditor Mike Davis’ devastating Planet of Slums, which focuses on the lot of the more than two billion people who live on less than $2 a day. While the rich residents of the dreamworlds of neoliberalism frantically try to “disembed”
themselves from the poverty that surrounds them, attempting to secede from the rest of humanity, their fantastical lifestyles depend on their exploitation of the labor of the global underclass that Davis chronicles. The inhabitants of Evil Paradises consume the goods produced by, resources extracted by and food grown by the residents of the Planet of Slums, to say nothing of their domestic labor. Together, the two books present a picture of a world that increasingly resembles the bifurcated future society depicted in H.G. Wells’ The Time Machine — although perhaps less stable.

The editors argue in their introduction that the nouveaux riches of neoliberalism are haunted by the dual specters of the barbarians at the gate and imminent ecological crisis, their flagrantly unsustainable and narcissistic consumption pointing to their foreboding notion that they are living on borrowed time. “Indeed, by their very existence, the indoor ski slopes of Dubai and private bison herds of Ted Turner represent that ruse of reason by which the neoliberal order both acknowledges and dismisses the fact that the current trajectory of human existence is unsustainable.”

These two works provide a frightening and fascinating account of the dystopia that is the present.