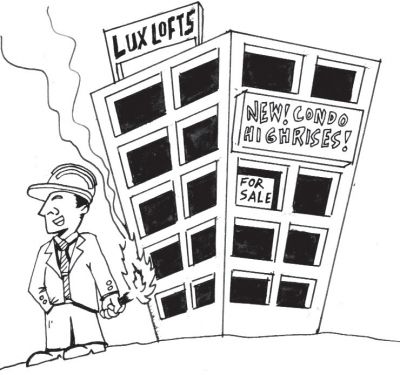 From Welfare State to Real Estate: Regime Change in New York City, 1974 to the Present
By Kim Moody
The New Press, 2007

For newcomers to New York City, it’s hard to imagine a time when housing costs weren’t so high and urban decay was the norm. But 30 years ago, the city almost called it quits. Facing a financial crisis in the mid-1970s — a product of national stagnation, inflation, the oil crisis and the devaluation of the municipal bond market — New York teetered on the verge of bankruptcy. Many landlords torched their buildings to collect insurance in lieu of rents.

The common narrative of former Mayor Rudy Giuliani’s “cleaning up” the streets to make it “safe” for people in the suburbs to move back, is so well-worn it’s cliché. Kim Moody’s, From Welfare State to Real Estate tries to set the record straight about New York’s recovery. In the vein of Naomi Klein’s, The Shock Doctrine: The Rise and Fall of disaster Capitalism, Moody argues that New York’s investment banking and real estate elite used the 1970s financial crisis to further their economic interests and curtail social spending.

Investment banks in the world finance capital had global interests and began selling off New York’s municipal bonds as the city’s deficit ballooned. Bonds are an issuance of debt with a fixed interest rate that is tied to the financial health of the issuing entity (governments and corporations) and assessed by rating companies like Standard and Poor’s and Moody’s Investors Service. Fueling the sell-off was the underregulated private bond market, backed by banks and “some nine hundred” other firms. The New York State government was issuing billions more in bonds under former Gov. Nelson Rockefeller and in early 1974, one of the issued bonds temporarily defaulted, further eroding buyer confidence.

Thus, a crisis was created and the elite sprung into action. The book illuminates the role of the various obscure ad hoc institutions headed by the corporate elite and, finally, the permanent Emergency Financial Control Board (EFCB) created to solve the crisis. The EFCB’s solution was a bailout with strings attached: municipal wage freezes, tuition at City University of New York (CUNY), budget cuts and the right for the board’s right approve or disapprove the city’s budget.

Moody takes the municipal labor unions to task for their complicity in the restructuring of New York City’s finances. Municipal union pension funds helped bail out the city by heavily investing in municipal bonds. As a result, the unions are at the mercy of bond rating companies if their pension funds are to remain solvent. This creates a built-in disincentive for municipal unions to push for economic gains, as the rating companies could downgrade the bonds’ worth, lowering their pension portoflios if unions challenged the EFCB’s budget constraints.

Moody’s book is also a history of neoliberalism, which he defines as “restraint on social spending, privatization, deregulation, and, most importantly, the reassertion of class power by the nation’s capitalist class.”

Though the book is dense, Moody’s chronology is easy to follow, the chapters broken down by mayoralties from Koch to Bloomberg. Central to the book is the idea that the business elite comprise a “permanent government” through their power over the budget, and thus who the mayor is does not matter so much. But I suspect any progressive who lived in Giuliani’s New York would beg to differ.

Moody’s other central argument is that gentrification, which the government actively facilitates, is part of the neoliberal project. Seen through this lens, Giuliani’s police crackdown was more about protecting property than people (crime rates started falling under Mayor Dinkins). By the same token, Bloomberg’s rewriting of tax abatements and rezoning of large swaths of the city open up every neighborhood to economic change.

Every organizer in this city would be well advised to read From Welfare State to Real Estate, although you may need to take a college-level class to understand it fully.