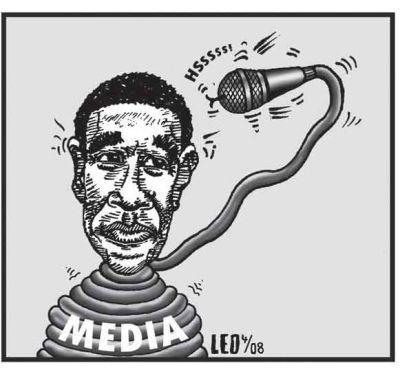 A black man runs from a howling crowd. If he’s caught he’ll be torn apart. If he reaches sanctuary he’ll be loved. This ritual is the Sacred Lynching. It’s a scene from Olaf Stapledon’s science fiction book, The First and Last Men. Set in the future, humanity has mixed and few people are “white” or “black,” and the ritual is a nostalgic celebration of racism in a post-racial world. It resembles our own supposed post-racial politics, and I see Senator Barack Obama as that last black man on earth trying to outrun our media mob.

And the mob tries. At ABC’s Democratic primary debate in Philadelphia, hosts Charles Gibson and George Stephanopoulos tied trivia around Obama’s feet. What about your angry black pastor? Are you patriotic? Are you a friend of a Weathermen terrorist? Obama questioned their questions until they looked absurd. The audience caught his cue and afterwards, when the cameras blinked off, they heckled the hosts.

The media chase Obama because, if he wins the presidential race, he’ll break the last American color line, which is also the line between our repressed history and our collective consciousness. A nation, just like an individual, will repress images and ideas that conflict with its self-image. The violence that created who we are — enslavement of Africans, indigenous peoples marched off their land, workers hanged for unionizing — contradicts our self-image as the greatest nation on earth, so our media-represses it.

Into this dynamic steps Obama, a black man whose skin color is the sign of our repressed violent history. Slavery was a bloody part, but even within whiteness there leaned a class ladder that European immigrants climbed rung by rung to be properly American. Workers fought police hired by robber barons and corporate emperors in street brawls until World War II ’s economic nationalism whitewashed them all. Such history should make Obama’s campaign for the White House, the site of our national superego, impossible. Yet he outruns the media mob not by “transcending” race but in transforming himself from a black man to a blank man.

On him audiences project a wished-for unity. He is in Freudian terms a compromise- formation, a form taken by repressed memory to be re-admitted to consciousness. Obama is America’s repressed violent history returning as a chance at redemption. Yet to win he must get past our defenses embodied by the right-wing media mob that tries to “blacken” him. Obama has to run a race against race.

First Obama compromised. He cannot run on a theme of racial justice because his sheer presence is read as proof of its possibility if not its existence. He crystallizes the American hunger for unity by invoking economic nationalism, which works for the out-of-work left. But for the right, no compromise would be enough.

And it struck quickly. In January 2007 Fox News “broke” a story that Obama smoked. “Would you want a smoker in the White House?” they asked. It was a silly dig. He wasn’t a serious contender at the time, but it was the first code word for dirt, of a pollutant staining the polished whiteness of the Oval Office.

Next Fox “reported” that he went to a Muslim school. CNN disproved it. But the report wasn’t meant to be real, just believed. It was another attempt to link the fear and rage of 9/11 to Obama. In an interview with Senator John McCain, the conservative host kept mentioning Obama’s middle name, Hussein. Reporters constantly slipped and called him “Osama,” not Obama.

None of it was taken seriously until Obama’s former pastor, Jeremiah A. Wright, Jr., hurled prophetic condemnations at America. The footage was looped on cable TV and YouTube and became a crisis. Prophecy is testimony passed through generations of black people from the plantation to the pulpit. This burden of truth one could shun, embody, exploit or love, but not ignore. Fox News pounced on it. Soon pundits saw Obama’s blackness.

Obama’s skin color was never invisible, but it’s where many whites saw reflected the content they wished for their own character. But now, inside smiling Obama, they saw a fiery pastor, and the flames jumping out of his mouth illuminated a dark and angry world they hoped to leave behind. Obama’s poll numbers dropped. He was losing the race against race.

The controversy forced Obama to give his now-acknowledged classic speech on race in Philadelphia. In 37 carefully crafted minutes, he guided America into its denied history. He balanced black rage and white resentment like a see-saw on the same fulcrum of corporate greed. “Just as black anger often proved counterproductive,” he said, “so have these white resentments distracted attention from the real culprits of the middleclass squeeze — a corporate culture rife with inside dealing … and short-term greed.”

When he was finished he left the podium for his wife Michelle who wept backstage. He’d married her to grow roots into the black tradition. She gave him a family to love and the mirror of history to see himself in. It was this talisman that makes his speech mythic.

Obama’s travels parallel a Malaysian legend in which a young man, the fastest in the village, has to outrun demons. If he does, the village will live. If not, they will be destroyed. So he runs, swift-footed, far ahead of the howling mob. Yet they catch up to him. Stumbling with fatigue, he is about to fall when he takes out the mirror his wife gave him and flashes it at the demons. Their reflection terrifies them and they burst into dust.

Obama, like the Malaysian hero, was in our ritual trial, our Sacred Lynching. He did what mythic heroes must: he changed the rules of the game. As the media mob caught up to him, he flashed the mirror of America’s repressed history and they, seeing themselves, were driven back.

He is only a liberal mainstream politician. He will not bring the Revolution and he still has to run. The recent Pennsylvania primary put in doubt, if not ultimate nomination his ability to enlist the white working class. Still, we saw the first black man to fend off the mob. It was a powerful symbolic victory, but only symbolic.

The danger of Obama is if he compromises too much the repressed memory of American violence, both racial and class, will not be fully recognized. If that happens no real change can happen and we will have the “token integration” that Malcolm X warned against. We need systemic change and that can only come when the left wedges open the small fissure Obama’s campaign has made. After years of exile, we need sanctuary too.