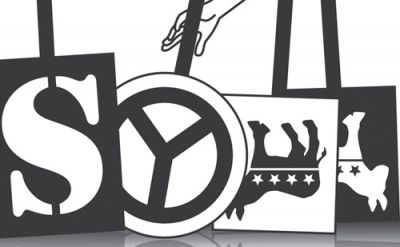 Neither Clinton nor Obama has a real plan to end the occupation of , but they could be forced to change position.

So said Dick Cheney when asked last week about public opinion being overwhelminglyagainst the war in . “You can’t be blown off course by polls.”

His attitude about the fact that the number of soldiers killed in has reached 4,000 displayed similar levels of sympathy. They “voluntarily put on the uniform,” the vice-president told ABC News.

This brick wall of indifference helps explain the paradox in which we in the antiwar camp find ourselves five years into the occupation of : antiwar sentiment is as strong as ever, but our movement seems to be dwindling.

Sixty-four percent of Americans tell pollsters they oppose the war, but you’d never know it from the thin turnout at recent anniversary rallies and vigils.

When asked why they aren’t expressing their antiwar opinions through the antiwar movement, many say they have simply lost faith in the power of protest. They marched against the war before it began, marched on the first, second and third anniversaries. And yet five years on, leaders are still shrugging: “So?”

There is no question that the Bush administration has proven impervious to public pressure. That’s why it’s time for the antiwar movement to change tactics. We should direct our energy where it can still have an impact: the leading Democratic contenders.

Many argue otherwise. They say that if we want to end the war, we should simply pick a candidate who is not John McCain and help them win: We’ll sort out the details after the Republicans are evicted from Some of the most prominent antiwar voices — from MoveOn.org to the magazine we write for, The Nation —have gone this route, throwing their weight behind the Obama campaign.

This is a serious strategic mistake. It is during a hotly contested campaign that antiwar forces have the power to actually S. policy. As soon as we pick sides, we relegate ourselves to mere cheerleaders.

And when it comes to , there is little to cheer. Look past the rhetoric and it becomes clear that neither Barack Obama nor Hillary Clinton has a real plan to end the occupation. They could, however, be forced to change their positions — thanks to the unique dynamics of the prolonged primary battle.

Despite the calls for to withdraw in the name of “unity,” it is the very fact that Clinton and Obama are still fighting it out, fiercely vying for votes, that presents the antiwar movement with its best pressure point. And our pressure is badly needed.

For the first time in 14 years, weapons manufacturers are donating more to Democrats than to Republicans. The Dems have received 52 percent of the defense industry’s political donations in this election cycle —up from a low of 32 percent in 1996. That money is about shaping foreign policy, and so far, it appears to be well spent.

While Clinton and Obama denounce the war with great passion, they both have detailed plans to continue it. Both say they intend to maintain the massive Green Zone, including the monstrous embassy, and to retain control of the .

They will have a “strike force” to engage in counterterrorism, as well as trainers for the Iraqi military. Beyond these forces, the army of Green Zone diplomats will require heavily armed security details, which are currently provided by Blackwater and other private security companies. At present there are as many private contractors supporting the occupation as there are soldiers, so these plans could mean tens of thousands of personnel entrenched for the future.

In sharp contrast to this downsized occupation is the unequivocal message coming from hundreds of soldiers who served in and . Iraq Veterans Against the War, who held the historic “Winter Soldier” hearings in Silver Spring, Md. earlier this month, are not supporting any candidate or party. Instead they are calling for immediate, unconditional withdrawal of all soldiers and contractors. Coming from peace activists, the “out now” position has been dismissed as naive. It is distinctly harder to ignore coming from hundreds who have served — and continue to serve — on the front lines.

The candidates know that much of the passion fueling their campaigns flows from the desire among so many rank-and-file Democrats to end this disastrous war. It is this desire for change that has filled stadiums and campaign coffers.

Crucially, the candidates have already shown that they are vulnerable to pressure from the peace camp: When The Nation revealed that neither candidate was supporting legislation that would ban the use of Blackwater and other private security companies in , abruptly changed course. She became the most important political leader to endorse the ban, scoring a point on Obama, who opposed the invasion from the start.

This is exactly where we want the candidates: outdoing each other to prove how serious they are about ending the war. That kind of issue-based battle has the power to energize voters and break the cynicism that is threatening both campaigns.

Let’s remember: Unlike the outgoing Bush administration, these candidates need the support of the two-thirds of Americans who oppose the war in . If opinion transforms into action, they won’t be able to afford to say, “So?”

Naomi Klein is the author of The Shock Doctrine: The Rise and Fall of Disaster Capitalism and Jeremy Scahill is the author of Blackwater: The Rise of the World’s Most Powerful Mercenary Army. This article first appeared in The Guardian () March 26.