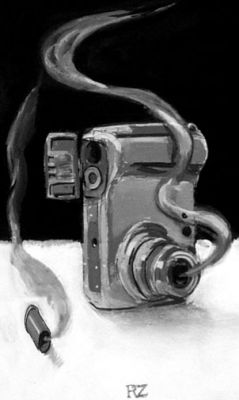 Iraq, the crime of our time, has made lawlessness a national pastime. The Democrats have taken impeachment off the table and no one else is looking to hand out arrest warrants anytime soon. Despite this prosecutorial vacuum, the documentary filmmakers of the world have been compiling the evidence and the latest is no other than Errol Morris.

Morris, a private investigator turned Oscar-winning documentarian, directs like a detective, meditating over evidence (The Thin Blue Line) or questioning a suspect (The Fog of War). Now, in Standard Operating Procedure, he sets his sights on solving the photographs of the Abu Ghraib prison.

The photos, which we’ve all seen, are shocking and graphic: instant icons of the Geneva Convention set ablaze and seemingly replaced by a twisted manual on sexual humiliation. But let’s not be flippant: these were 20-year-olds assigned halfway around the world and ordered to do what? The context is important and Morris wants to know who the soldiers in these pictures are, what the pictures depict and what it all means. To study the specifics requires deceleration, and the resulting details can be rewarding. Morris talked to almost all the implicated soldiers, a seasoned interrogator and the investigator assigned to the case, all of whom highlight the confusion and coercion rampant throughout the jail. Lynndie England, famous holder of a leashed Iraqi on the floor, becomes human as she talks forlornly about her naiveté, love and the ensuing heartbreak. The pictures of her and other women joshing with their fellow soldiers (simulating fellatio and handcuffed to a cell) speak volumes about the misogyny present in the military.

The interviews are cut oddly with jarring edits and interspersed with the like-them-or-hate-them reenactments that Morris loves.

There are two notable absences. Charles Graner haunts the recollections as ringleader, provocateur, and enigma. Graner had a central role in staging the photographs, fathered England’s child and later married Megan Ambuhl, another central figure. He is still serving time for convictions resulting from the photos and the military did not allow him to be interviewed. The second lack is more troublesome: Morris fails to interview a single Iraqi. The filmmaker has said that he was unable to find the Iraqis pictured, but this does not excuse the omission. As men are reduced to the subhuman, they are never heard and remain permanent victims.

As Morris cycles the pictures into a timeline and his scope widens beyond the individual anecdotes, a system is revealed. Morris delivers a clear insight: that the soldiers punished were punished for allowing the pictures to humiliate the military, not for the pictures’ content. Furthermore, with little exception, the pictures are of humiliation and the before-and-after of torture, but not the act of physical harm, which was largely perpetrated by unpunished higher-level military personnel. Morris reveals that the photos themselves, shocking as they may be, often just showing standard operating procedure and this is where he intends our real dismay to arise.

This is a profound point, but it doesn’t go nearly far enough and the problem is precisely Morris’. From talking with him after the screening, it is clear that he sees any larger point as a political football to be used as propaganda either by the antiwar left or as the pro-war’s defense of a “few bad apples got what they deserved.” Instead Morris hands in his evidence and asks us to think about it. The war in Iraq is five years old, Abu Ghraib is not murder mystery dinner theater, and Morris has a third option: posing to the audience the question of our own responsibility and about what to do next. Anything less is a cold case.