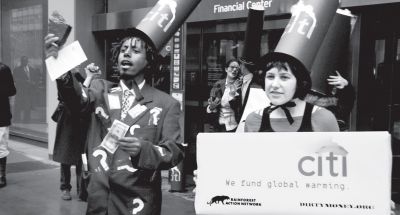 Defunding The Coal Industry: Police arrested two environmental activists posing as “dirty energy billionaires” with top hats and pinstripe suites for chaining themselves to Citibank’s front doors in Midtown Manhattan April 1. Organized by the Rainforest Action Network, 25 billionaires protested outside Citibank as a part of Fossil Fools Day, an global day of environmental action organized by the International Rising Tide Network and the Energy Action Coalition dedicated to public pranks and humorous protest against the fossil fuel industry. Overall, 150 actions and street performances were staged across the world from the deadly serious — eight activists were arrested for chaining themselves to bulldozers and disrupting the construction of a coal-fired power plant in North Carolina — to the lighthearted when protestors picketed outside a London Porsche dealership dressed in polar bear costumes.