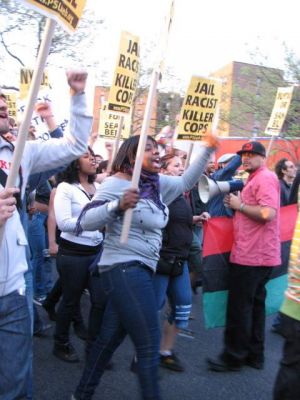 Following yesterday morning’s announcement of Judge Cooperman’s “not guilty on all counts” acquittal verdict of 3 of the 5 NYPD officers involved in the murder of Sean Bell, hundreds gathered in Queens to express their outrage. Disgusted by the trial process (determined by 1 judge rather than a jury), and the unjust outcome, the Peoples Justice rally began at 5:30pm by the Queens DA’s office, with family members speaking of having lost loved ones to police brutality, and others speaking of personal experiences being victimized by law enforcement violence, including: Nicholas Heyward, Sr. spoke of his son – Nicholas Heyward, Jr. – murdered by the NYPD; members of Jayson Tirado’s family; Juanita Young, mother of Malcolm Ferguson and founder of Parents Against Police Brutality; representatives of the Bushwick 32 case; Desis Rising Up & Moving, linking the struggle against police brutality to the struggle against the criminalization of immigrants. In addition to justice for Sean Bell and other specific cases, Peoples Justice is calling for an end to racist & militarized policing of our communities; the creation of a permanent independent prosecutor for all cases of police brutality in NYC; and increased efforts for community control of our safety through creation of community Cop Watch patrols and Know Your Rights work.

Peoples Justice moved the rally from the Queens DA’s office with a march to Liverpool, the site of the 50-shot murder of Sean Bell and injuries to his friends Trent Benefield & Joseph Guzman. The un-permitted march, growing to 1,500 on Queens Boulevard, stopped traffic and was greeted by enormous support from community members along the way — many joined the march; others honked their support from their cars, not seeming bothered to be stopped in traffic; others cheered from rooftops, apartments, stores, and buses.

At the closing rally on Liverpool (site of the shooting), about 500 vowed to continue the struggle for justice for Sean Bell & all victims of police brutality. Co-MC’s Jessica Sanclemente (from the Justice Committee) and Thenjiwe McHarris (Malcolm X Grassroots Movement) reminded community members of the need to demand accountability of the police while also taking steps towards community control through Know Your Rights education and Cop Watch patrols. Those interested in developing their own Cop Watch patrols can contact the Justice Committee or Malcolm X Grassroots Movement for more information, and Peoples Justice can be contacted for more information about Know Your Rights training.

Following the close of the formal Peoples Justice march & rally, some continued with an impromptu march through parts of Jamaica, Queens. According to updates Peoples Justice received, at about 11:30pm, following the dispersal of one group at the 103rd Precinct, a protester was arrested as he was leaving, and a legal observer who tried to get badge information of the arresting officers was also arrested. After getting the news last night, Peoples Justice organizers secured an attorney to work with the 2 who were arrested, and also had several Peoples Justice organizers go to the 107th precinct where they were being held before being transported to Central Booking. The attorney attempted to have them released with DAT’s (desk appearance tickets), which is often protocol in such cases. The NYPD refused. We expect that the 2 will be released today, and will post additional updates if community mobilization is required.


Links to previous coverage of Sean Bell shooting and trial:

Why I Joined the Vigil for Sean Bell: A Letter from an Activist by Kevin Powell