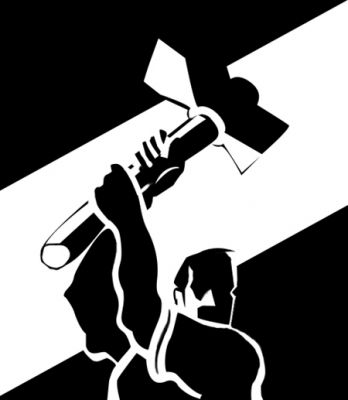 A Review of The Man Who Hated Work and Loved Labor: The Life and Times of Tony Mazzocchi by Les Leopold, Chelsea Green Publishing, 2007

Starting in the working-class neighborhood of Bensonhurst, Brooklyn, where the first Mazzocchis settled after leaving Italy in 1901, the book spans a century and ends with Mazzocchi’s 2002 death at age 76. Every major U.S. social movement — from efforts to save anarchists Sacco and Vanzetti to the communist agitation of the 1930s, the post-World War II building of American suburbs, and the civil rights, antiwar, and women’s rights movements — gets attention. Nonetheless, Mazzocchi and his devotion to workers are always front and center.

Leopold depicts Mazzocchi, a leader in the Oil, Chemical and Atomic Workers union (OCAW), as a complex, driven man, a mix of fearless agitator, bold innovator, and creative genius. Not bad for a high school dropout with minimal writing skills. At the same time, The Man Who Hated Work is not hagiographic. Mazzocchi, like the rest of us, was flawed. He tended to be a workaholic and paid too little attention to his six children; two marriages ended in divorce and his womanizing was legendary. At the same time, his passion for social justice and his commitment to union democracy and a break with the
Democratic Party harkens to a time before bureaucrats and playit- safe strategies dominated the labor landscape.

Alongside Ralph Nader and Karen Silkwood, an OCAW activist at the Cimmaron, Okla., Kerr-Mc-Gee nuclear facility who died under suspicious circumstances in 1974, Mazzocchi put forward plans to end war-mongering and nuclear build-up while preserving jobs.

He used his own post-World War II experiences as a reference point, arguing that if the Serviceman’s Readjustment Act of 1944 — the G.I. Bill — could give returning soldiers a weekly stipend and pay for job training at one point in history, a similar measure could be passed in a post-nuclear age.

His speeches were riveting, militant and straightforward. This mix of verbal acuity and Brooklyn street smarts was clearly winning, and Mazzocchi was known for swaying both managers and right-wingers with his oratory. But that’s not to say
that he always won. His dream of a Labor Party languished and his antimilitarist, anti-corporate hammering got him smeared as a Red, and worse.

Still, if derisive labels hurt Mazzocchi or got him down, Leopold doesn’t let on. Instead, we’re introduced (or for some, reintroduced) to a visionary scrapper of the highest order.

Leopold is to be lauded for resurrecting Mazzocchi’s example. Optimistic and ferocious, capable of determining when to compromise and when to hold the line, he sets an example with his well-lived life. In addition, the book is a valuable labor history, showcasing the squabbles and debates that undergird today’s union morass.

Although largely unsung during his lifetime, Mazzocchi’s efforts to reward toil and win respect for those who labor are far from dead. Like Joe Hill before him, he will always be present.