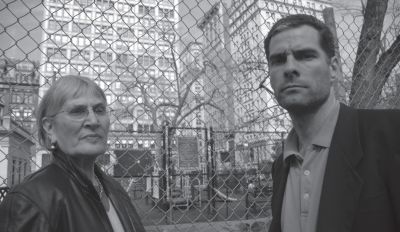 The chain link fences are up around the north end of Union Square Park as the city prepares to launch a $20 million renovation that critics say privileges private business interests over the public good.

The overhaul began in 2002 as a $1.9 million initiative by then City Council Member Margarita Lopez to improve two playgrounds on both sides of the pavilion at the north end of Union Square. By 2004, the Parks Department and the Union Square Partnership had folded the playground money into a $14 million scheme that would install a privately run restaurant in the pavilion. The pricetag is now at $20 million with an anonymous donor contributing $5 million.

“There’s absolutely no rationale for the city to be doing this except to appease business groups,” said Geoffrey Croft, president of NYC Park Advocates, a nonprofit watchdog group dedicated to monitoring New York City’s public spaces. “This is an area with the highest concentration of restaurants in New York City, and the lowest amount of playground space. The fact that the Business Improvement District has been able to usurp the public’s interest and the community’s interest is very unfortunate.”

In a 2005 survey that Croft conducted, there were 153 restaurants, markets and bars in a two-block radius around Union Square Park.

The makeover is supposed to be finished by the spring of 2009 and will include expanding playground space by unifying the two playgrounds, fixing up the run-down pavilion, the inclusion of new facilities for the Parks Department, cutting down at least 13 mature trees in the area around the pavilion to make way for the private restaurant and “improvements” to the north plaza of Union Square that hosts the city’s most popular Greenmarket. During the reconstruction, the Greenmarket will be displaced to the south and west sides of Union Square.

The plan has the support of City Council Member Rosie Mendez but has been criticized by Assembly Members Richard Gottfried and Deborah Glick, whose districts border Union Square, and Manhattan Borough President Scott Stringer. “[Stringer’s] position has always been to oppose the privatization of park space … and [he] opposes the construction of a restaurant in Union Square,” said Stringer’s press secretary Carmen Boon in an e-mail to The Indypendent.

Community Board 5, which encompasses Union Square, approved the plan in 2006, but urged the city to allow cultural institutions and community groups to have an opportunity to use the pavilion as well.

Project opponents have few legal options at this point but are weighing whether to pursue alienation proceedings that would bring a lawsuit against New York City to the New York State Assembly, in hopes that the Assembly would declare the private restaurant an unneeded facility in an area with an abundance of restaurants.

In the past, the pavilion has been used as a bandstand, a speaker’s platform, and a backdrop for protests and rallies. The north end of Union Square was the site of the first Labor Day Celebration organized by the Knights of Labor in 1882.

The Parks Department has drawn criticism for not divulging the name of the $5 million mystery donor whose gift is contingent upon the establishment of the restaurant. Meanwhile, speculation over who will end up running the restaurant has centered on Danny Meyer, a restaurant mogul who owns 11 eateries including Union Square Café and the Shake Shack at Madison Square Park. Meyer is also co-chair of the Union Square Partnership’s Local Development Corporation.

For people who also fought the city’s plan to partially privatize Washington Square Park under the rubric of improving it, the city’s efforts to remake Union Square are a familiar sight.

“There has definitely been an effort to privatize across the board, [especially] the parks … it seems to be an effort by Mayor Bloomberg to be in everybody’s public space,” said environmental activist Cathryn Swan.