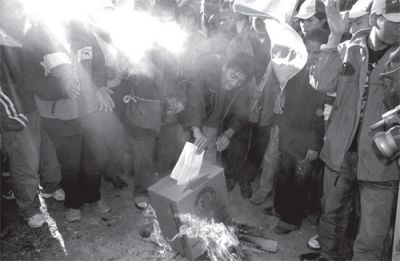 PHOTO by David Bluestone: Burning Ballot Boxes: Supporters of President Evo Morales show their rejection of the May 4 autonomy referendum in Santa Cruz, Bolivia’s wealthiest province. It was later reported that ballot boxes arrived at some polling stations already filled with “yes” ballots.

SANTA CRUZ, Bolivia — On May 4, voters in Bolivia’s Santa Cruz Department overwhelmingly approved a set of autonomy statutes that, if enforced, will give the province wide-ranging powers that currently are the domain of Bolivia’s central government. The vote represents the most serious challenge to date to Bolivian President Evo Morales and his ambitious agenda of racial and economic justice.

The referendum also exposed deep social rifts within Santa Cruz, Bolivia’s wealthiest province and home to large reserves of oil and natural gas. Although 80 percent of voters voted “yes” for the statutes, a large portion of Santa Cruz residents rejected the referendum, ruled illegal by Bolivia’s National Electoral Court, by boycotting the vote at the behest of President Morales.

While most voting went smoothly throughout Santa Cruz, residents of areas with majority populations of highland migrants loyal to the Morales government destroyed voting booths in their communities. These acts of defiance precipitated clashes between pro- and anti-referendum partisans that left hundreds injured. In Plan 3000, the city of Santa Cruz’s largest migrant slum, a 69-year-old man died from inhaling tear gas fired by police moving in to break up one of many street fights.

Despite the violence and high abstention rate, the passage of the May 4 Referendum represents a significant milestone for the Santa Cruz’s autonomy movement. To many of its supporters, the approved statutes will mean less centralized bureaucracy (presently, applications for business permits, marriage licenses and birth certificates all must be sent to Bolivia’s capital of La Paz) and more control over regional resources and governance. However, the darker side of the Autonomy Movement exploits supporters’ feelings of regional superiority and racist views that many hold toward highland migrants, who are seen as “invading” Santa Cruz.

While supporters see the statutes as a first step in addressing these frustrations, to others they represent a power grab by the department’s business and political elites. Statute opponents point to the fact that the law’s writers were not popularly elected but rather were handpicked by the departmental government and the right-wing Santa Cruz Civic Committee.

For Santa Cruz’s marginalized and indigenous peoples, certain articles in the statutes leave the door open to discriminatory laws that could violate their rights. One of their principle concerns is land rights. Many landless peasants and indigenous people in Bolivia are waiting for President Morales to fulfill his promise of comprehensive land reform. This is particularly important in Santa Cruz, where land ownership is heavily concentrated in the hands of fair-skinned elites. Article 102 of the statutes states that the redistribution of land is the responsibility of the departmental government and will be regulated by departmental law. Thus, the landed elite and their allies, who control the departmental government, would be able to implement a land reform to suit their interests.

Furthermore, Article 161 has generated anxieties due to its xenophobic and racist overtones. It states that the departmental government only is obligated to respect the rights of the five indigenous peoples native to the department. It fails to include Quechua and Aymara indigenous people who have migrated from Bolivia’s impoverished highlands and who make up 20 percent of Santa Cruz’s population. The highland indigenous are also strong supporters of Morales and his Movement toward Socialism (MAS) party.

Finally, the statutes afford the departmental government the powers to manage oil and gas extraction, to negotiate international treaties and to control migration within Bolivia.

Impact on the Country as a Whole

With the backing of the international community, Morales has requested a meeting with the governors of Santa Cruz and three other eastern lowland departments that also have autonomy movements. The governors of Beni, Pando and Tarija have declared that no dialogue can take place until after each department holds a referendum on its own autonomy statutes in the coming months. For its part, the U.S. government has publicly stayed neutral. Yet, over the last five years the United States has quietly supported the regional autonomy movement through “democracy promotion” programs funded by the U.S. Agency for International Development and the National Endowment for Democracy.

Bolivia’s private media outlets and Santa Cruz’s politicians have proclaimed that the referendum results represent a dramatic shift in Morales’ public support, but the numbers from this vote and past elections tell a different story.

Ultimately, MAS’ reluctance to embrace the issue of autonomy at its outset has proved to be costly. The irony of MAS’ position is that both MAS and the opposition agree that Bolivia needs a more federal system of government. But, by coming out strongly against autonomy, MAS alienated many in the lowland departments and effectively abandoned the issue. Thus it allowed autonomy to be framed by the opposition rather than participating in the debate over what it should look like. The question at hand continues to be, whether MAS can implement its national agenda with Santa Cruz so divided. Given the political and economic power Santa Cruz wields, MAS and Morales may have a difficult road to travel.

A longer version of this article originally appeared on upsidedownworld.org.