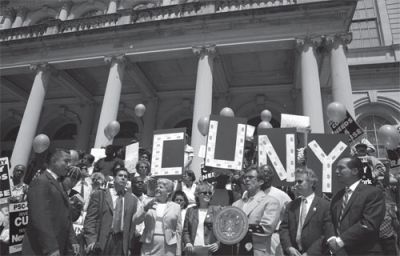 Fourteen New York City Council Members joined more than 150 City University of New York (CUNY) faculty, staff and students at a City Hall press conference May 7 calling on the mayor and the City Council to restore $44 million in budget cuts to CUNY that the mayor proposed in his Executive Budget in early May and to provide additional urgently needed funds for the city’s university.

“Enrollment at CUNY is higher than it has been in 35 years and students are streaming into the colleges to prepare for difficult economic conditions. This is no time to cut the City University,” said Dr. Barbara Bowen (at center, with glasses), president of the Professional Staff Congress (PSC), which organized the event.

The PSC is the labor union that represents 22,000 faculty and professional staff at CUNY. The City Hall protest was part of an ongoing campaign to restore funding to CUNY, which has been underfunded for decades.