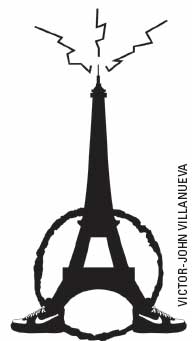 In 2005, the suburban housing projects that house France’s underclass erupted in riots. In the largest uprising since May 1968, residents attacked cops and burned cars following the deaths of two teenagers electrocuted while fleeing the police. France suddenly woke up to the fact that it was sitting on a powder keg: Structural inequality, racism and police brutality threw the spark into long-simmering discontent. Newspapers resorted to reprinting rap lyrics to explain the social situation to their readership.

The riots were deemed a nihilistic mirror image of the utopian uprising of May 1968 that had thrown the country into upheaval nearly 40 years before. But rioters’ nihilism was a collective response to social conditions rather than an individual, existential choice. It was a nihilism born of living in a society of consumption without the means to buy into, or a social welfare state whose mechanisms of solidarity didn’t include you.

Underground rapper Keny Arkana fuses the incendiary energy of the rioters with a political analysis derived from the global justice movement. France’s closest equivalent to Dead Prez, she drops knowledge in raps with the power of a Molotov cocktail.

Arkana’s recently released minialbum, Désobéissance, continues in the same vein as her 2006 classic Entre Ciment et Belle Etoile, combining sharp political rhetoric with tight rhymes. Starting with a call to “Civil Disobedience” against a “predatory” system based on the logic of profit, she makes herself into what Aimé Césaire called a “mouth for those who have no mouths.” In tracks with sloganeering titles like “Mother Earth Is Not for Sale,” “The Streets Belong to Us” and “World Order,” she connects a global system that “defends capital not human beings” to the stories of those on its losing side.

Born in Marseille of Argentine origin and raised in a series of foster homes, Arkana co-founded the alter-globalization group La Rage du Peuple (The People’s Rage) in 2003. In 2007, the group held popular assemblies in slums throughout France, and when not on tour, Arkana can be found at their meetings.

Despite the language barrier, neither Arkana’s intensity nor her flow need translation. If the rioters of 2005 are to re-emerge in the streets as a coherent political force, Arkana’s call to a “collective disobedience” will be playing from the sound truck.