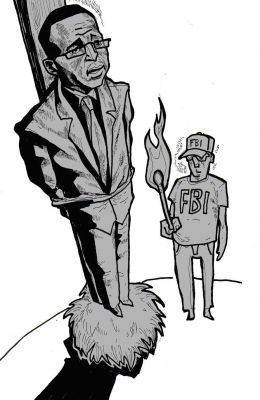 The Committee in Solidarity with the People of El Salvador (CISPES), illegally targeted in the 1980s by the largest FBI internal security program investigation of the Reagan era, is again being singled out by the U.S. Department of Justice (DOJ) for its alleged ties to a leftist political party in El Salvador.

In January 2008, CISPES received a letter from the DOJ that questioned the organization’s alleged relationship with the Salvadoran Farabundo Martí Front for National Liberation (FMLN), referencing the Foreign Agents Registration Act — an ambiguous 1932 law that requires groups supposedly acting as “foreign agents” to register with the federal government. The letter cites language from the CISPES website and an article published in the Washington Post on Dec. 17 following the visit of the FMLN’s presidential candidate to Washington, D.C., in December 2007. The DOJ gave no other evidence to back up its claim and the Washington Post article does not even refer to CISPES.

The DOJ letter states, “It has come to our attention … that the FMLN, and/or possibly its candidate for El Salvador’s 2009 presidential election, Mauricio Funes, hired your organization for the purposes of conducting a public relations media campaign to include political fundraising…”

CISPES has never had a contractual agreement with the FMLN or Funes, but rather an ongoing solidarity relationship based on shared political values that go back to the struggle for democracy and economic justice fought for by the people of El Salvador against a brutal U.S.-backed military regime in the 1980s.

And just like 20 years ago, CISPES is refusing to back down. Rather than acceding to DOJ demands to submit documents to “clarify” its relationship with the leftist FMLN, CISPES chapters around the country held press conferences and public events in early May to denounce attempted intimidation by the Bush administration.

“That the Department of Justice would wrongly evoke the Foreign Agents Registration Act to target this organization at this particular moment demonstrates the administration’s fear of progressive change sweeping Latin America,” said Mara Verheyden- Hilliard, a lawyer from the Partnership for Civil Justice. “It is an effort to intimidate and stifle solidarity groups in the U.S. who oppose the government’s efforts to install puppet regimes against the will of the people of Latin America.”

The FMLN and its presidential candidate have gained broad support nine months ahead of the 2009 elections.

One thing the DOJ letter certainly demonstrates is the watchful eye of the U.S. government over the Salvadoran electoral process, something which worryies many Salvadoran activists. The Bush administration has already shown a tendency to disrupt Latin American elections, undermining sovereignty and the right to self-determination In 2004, the last time the FMLN had a chance to win the presidency, U.S. government issued statements showing clear support for the right-wing Nationalist Republican Alliance party (ARENA) and threatened to cut off money sent from Salvadorans in the United States back to their families should the FMLN win.

In 1981, the FBI investigated CISPES for allegedly acting as a foreign agent of the FMLN. When that claim proved baseless, the DOJ launched a full-scale investigation based on the claim that CISPES was a front group for the U.S.-labeled “terrorist” FMLN. The FBI program of surveillance, harassment and intimidation lasted until 1987 and ultimately became a major embarrassment for the bureau when CISPES and the Center for Constitutional Rights forced the release of FBI files under the Freedom of Information Act.

Subsequent congressional hearings in the late 1980s revealed that the FBI conducted numerous illegal operations in its investigation of CISPES and ultimately helped curtail the scope of domestic surveillance activities (which were expanded again under the USA PATRIOT Act in 2001).

Burke Stansbury is the executive director of CISPES. To read the DOJ letter or learn more about CISPES, see cispes.org.