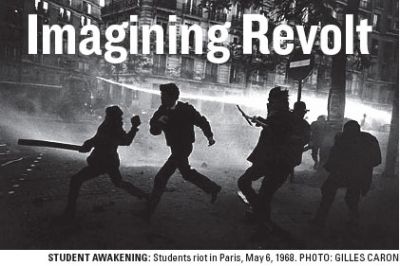 The slogans covered the walls of occupied factories and streets. “All power to the imagination.” “Be realistic, demand the impossible.” “We don’t want a world where the certainty of not starving to death means the possibility of dying of boredom.”

Forty years ago this month, France exploded in a wave of insurrection. Factories were occupied and universities shut down in one of the largest strike waves of the 20th century. “The children of Marx and Coca-Cola” left their unfulfilling lives of work or study and went into the streets, launching a collective experiment in living differently — a moment when everything seemed possible, even if it only lasted a month. May ’68 is perhaps the emblematic uprising of the global wave of revolt that peaked in 1968, putting “the establishment” on the defensive across the world.

The movement started modestly, with the March 22 student occupation of a university building in Nanterre, a Parisian suburb, in solidarity with students arrested for protesting the Vietnam War. The solidarity movement spread to other universities and when radical organizations went into the streets to celebrate May Day, battles between cops and students broke out in the Latin Quarter, the student neighborhood of Paris. The University of Paris was shuttered and within days, the fighting spread: Barricades were erected and cars burned throughout the Latin Quarter. By May 9, students across France went on strike and declared their universities liberated zones.

From the universities, the strikes spread to factories, starting with car manufacturer Renault and catching like wildfire. By the end of the month, 8 to 10 million workers were on strike, paralyzing the nation of 50 million.

While their situations were different, students and workers shared a sentiment of alienation, of being caught up in a stultifying life centered on work (or study) and consumption. May ’68 was a revolt against boredom, alienation and social control rather than for “bread, land and peace” or any such material demands.

But as quickly as the upheaval of May ’68 spread, it subsided. Toward the end of the month, the Communist Party-controlled union, the Confédération Générale du Travail CGT, ushered workers back in the factories in exchange for hefty pay raises. And as the workers re-entered their workplaces, the students left the streets.

In the midst of the rioting, French President Charles de Gaulle had called for new parliamentary elections. By the end of June, his party won by a landslide, a devastating defeat for the electoral left. Soon after, the cobblestones of the Latin Quarter were paved over with asphalt — far harder to throw at cops — while in 1970, the University of Paris was broken into 13 sections to make strikes less likely to spread. Veterans of the movement of May ’68 returned to their lives, some permanently radicalized by their experiences but many others putting in a few years in left-wing groups — mostly Maoist — before returning to mainstream society or writing off the possibility of radical social change.

The victory of the Socialist Party in the 1981 presidential elections was initially hailed by many as a delayed triumph of the generation of ’68, but as the Mitterrand government shed its left-wing commitments under the pressure of circumstances, the fanfare quieted. Nonetheless, the steady rightward trajectory of the Socialists, taking many former militants of ’68 with them, does seem emblematic of the “reconciliation with reality” of the mainstream French left. From then on, the demands for autonomy and a less alienated form of life raised by May ’68 were dismissed as “utopian” and May ’68 characterized as a fleeting exception — however glorious or important — from the regular humdrum reality of politics. 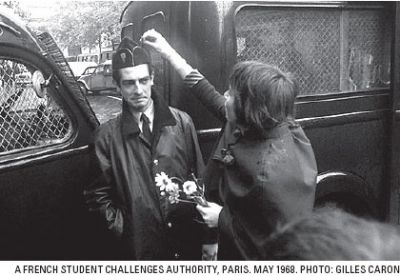 With the 40th anniversary of May ’68, innumerable ’68-ers have published memoirs of their youthful engagement, contributing to an indigestibly large and growing pile of writings on the subject. Much as with “the sixties” in the United States, most of their contributions simultaneously rue and celebrate the naïve idealism of their youth or take credit for the change in work and gender relations while disavowing their immature dreams of revolution. Some marginal figures have chosen to defend their youthful radicalism or even call for a new wave of uprisings. Others claim that the shattering of traditional social roles in May ’68 ushered in the amoral culture of consumption in which we live — love it or hate it.

Forty years after the fact, May ’68 remains a central reference point for French politics. On the left, activists born well after the event study it, measure themselves against it and even try to recreate it.

The discourse of class, let alone revolution, has been deemed passé and the Socialists, having ceased to be socialist in all but name, fail to offer any significant alternative to the logic of untamed capitalism. But the right continues to be haunted by the specter of May ’68 and the radical revolt that it represents. On the campaign trail last year, current President Nicholas Sarkozy spoke of the need to “liquidate” the legacy of May ’68, blaming it for what he called the moral crisis of French society.

It borders on the bizarre that Sarko — a professed Catholic on his third wife — would claim that France’s moral renewal hinged upon the need to “do away with May ’68, once and for all.” After all, it would seem to the casual observer that the country has already practically done away with May ’68. If anything, those on the right, with their attacks on the social welfare state, are the radicals in France these days. Far from their days of posing utopian demands, the left dares little more than a rearguard defense of public programs. A contemporary re-enactment of an uprising on the lines or the scale of May ’68, a radical rejection en masse of the existing society, is unimaginable.

But revolution is always unimaginable until it happens. In 1788, it was unimaginable for the French people to claim their liberty by seizing the Bastille, hated prison and symbol of the ancien régime. And in 1967, it was unthinkable for a student-initiated movement to throw into upheaval the entirety of France. Stillborn as it may have been, the failed revolution of May ’68 still symbolizes the promise of the irruption of the impossible into French political life: the creation of the new.

FURTHER READINGS:
The Imagination of the New Left
By George Katasiaficas
A brilliant and inspiring global analysis of the revolts of 1968, focusing on the United States and France.

Obsolete Communism: The Left-Wing Alternative
By Daniel and Gabriel Cohn-Bendit
A recounting of the events of May ’68 and argument for a political left outside the Communist Party by leaders of the student movement, written in the five weeks following the restoration of the authority of the French state.

May ’68 and Its Afterlives
By Kristin Ross
An incisive study of how the official retelling of the events of May ’68 has defanged it, reducing a mass political movement with roots in years of anti-imperialist struggle to the cultural discontents of Parisian students. 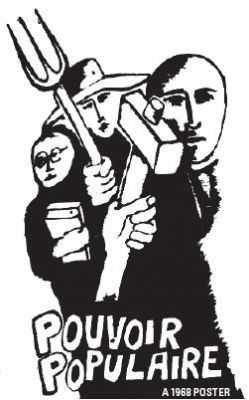 The Rise and Fall of Libération

The trajectory of the French daily Libération provides a snapshot ofsorts of the journey of the generation that came of age in 1968 (as well as the French left) over the last four decades. Founded in 1973 by Maoist militants who had cut their teeth during May ’68, Libération was intended to provide a source of information unbeholden to ads or shareholders. In its founding manifesto, the paper vowed to fight “against groveling, complacent journalism.” Jean Paul-Sartre, its first editorial director, elaborated, “We have refused to become an industrial and commercial undertaking.”

By 1982, Libération had decided to accept advertising. In his editorial on the first day it published ads, editor and co-founder Serge July stated that he wanted advertisers to join “us in making the leap of creation, audacity and provocation.” The year before, July had claimed that “the left and the counter-culture had ceased to be creative forces.” By 1986, he would state, “The real rupture is claiming to be liberal in the 18th-century sense of the term.”

Along with its audience of ’68-ers, Libération took steps to “normalize” itself and cast off its dissident past throughout the 1980s. By 1988 its advertising department put out a brochure stating that, “Libération is framed for upwardly mobile professionals.” A year later, the marketing weekly Stratégies declared Serge July its “man of the ‘80s” and a “modern winner.”

Only nostalgics could have been too surprised when July declared in 2002,“Personally, I am for neoliberalism. Personally, I am all for competition.” Nonetheless, it was a telling irony when Libération, founded to provide an alternative to the capitalist press and “give the people a voice,” was bought in bits and pieces by financier Édouard de Rothschild in the following years. Rothschild brought the story to an end of sorts in 2006 when he fired July for failing to produce adequate financial results. —M.W.