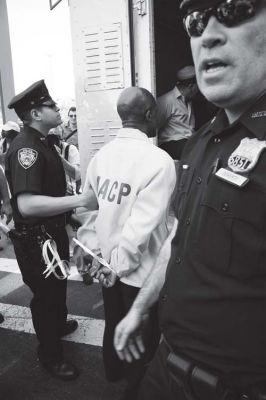 Photos by Andy Stern, andrewstern.net: (Left) A demonstrator is arrested May 7 after blocking traffic at the entrance to the Holland Tunnel. More than 200 people were arrested that day at six actions across the city. More protests are being planned. (Middle) NYPD officers and protestors square off outside the 103rd precinct building in Jamaica, Queens on the night of April 25. (Bottom) A member of SEIU is arrested May 7 for blocking the entrance to the Holland Tunnel.

On April 25 the value of my life dropped. It was on a scale held by Queens Supreme Court Justice Arthur J. Cooperman. On one side were three NYPD policemen. On the other the death of Sean Bell, a young black man they killed last year. I, my friends and, it seemed, all black New York stood in the pan with Bell’s family.

We stood with them because we’d seen black men stumble from school to jail, fight in the streets or fight themselves and knew why they struggled even as it scared us. The police never look past the color or swaggering manhood to the confusion beneath. They just shoot, and that is our collective experience, the backdrop against which Bell’s murder made sense to us. When the trial began, I hoped for justice. A part of me froze until April 25, the day the verdict was due.

I woke and turned on the computer, eager for the news. Scared, I typed nytimes.com, read the headline and sank into my chair, tried to shape words but the air kept leaking out. All the cops were acquitted. My friend called and told me of a rally at the Queens courthouse. After dressing, I went out but saw no one in the street talking about the verdict. A woman pushed a laundry cart. Workers sipped at steaming coffee cups. I was dazed. How could life just go on when its value was being lost?

On the train to Queens, my heart felt like an alarm clock. At Union Turnpike I ran to the street and saw cops guarding the courthouse. Next to it was a park where activists chatted. A tingling impatience was in the air as if we waited for the show to start. A sister from the Malcolm X Grassroots Movement yelled through the megaphone. We craned our necks, listening to the incantation of wrongs. We drew in as a young brother with corn-rows yelled, another brother, in all black, Pan-African flag flapping at his belt yelled. The rhetoric formed interchangeable pieces of the same puzzle, “People’s Justice!” or “Revolution!” No one moved beyond Sean Bell the symbol to Sean Bell the man.

The joyful vengeance contrasted with the despair I saw in photos from the morning. What I remember from them, from Sean Bell’s funeral, from his mom, Valerie Bell, at the precinct vigil was deep pain welling up from the absence of a man they loved. For activists, Bell was a symbol to illuminate their politics. There existed two different visions of the same man.

The first vision was near-sighted. The grind of life, the drama of family, of love and loss and money take up the whole horizon. Everyday people can’t see the larger system that is their invisible cage. Activists suffer from far-sightedness. They see through the prism of history, so that only that cage is visible. Ideas are more real. Each new victim, like Sean Bell, is reduced to a sign of another domino falling under the momentum of power. Such historical far-sightedness can cause blinding arrogance.

“When we chant ‘No Justice, No Peace’ what does that mean?” demanded the woman from the Malcolm X Grassroots Movement. No one answered; instead we directed our shouting at the street and began to march. A banner with Sean Bell’s face and 50 bullet holes was held like a passport; it gave us the right to move across the border between laws. We were a wave. At our crest, photographers walked backward. They bent, angled, clicked. We marched up Queens Boulevard up Jamaica Avenue. The longer we marched, the louder we yelled. I ran past the stone-faced police, past the blinking cruisers to the front where the march looked more like a festival of rage.

We weren’t doing much, I thought. We demand revolution but won’t try simple civil disobedience. We can’t say the obvious truth, that Mayor Michael Bloomberg and Police Commissioner Raymond Kelly knew we would march and let us, figuring correctly that we weren’t worth arresting.

We turned into the lot of Club Kalua where Bell was killed. The march eddied around the speaker. “Leave peacefully,” she said. “Don’t give them a reason to arrest you.” She told us that what we do afterward is our responsibility. The structure that bound us evaporated and we bounced around like loose atoms. Revolutionary Communist Party members called for a new march: “Let’s keep it going!” We reassembled ourselves, same chants and same movement forward.

I left for home feeling lost. Days went aimlessly. At school I watched my students and worried that they’d step in traps they couldn’t see. In the background the tension over the verdict built and then Rev. Sharpton’s National Action Network called for six rallies across the city on Wednesday, May 7. Each one would march to a bridge or intersection and stop traffic. I hoped it was the beginning of a real resistance and went to One Police Plaza. Protesters counted aloud the number of shots: “One, two, three…,” I joined and we held our fists up. “Forty-eight, forty-nine, fifty.” Bored reporters tapped pens on notepads. Women anchors teetered on high heels to whoever yelled loudest or looked normal enough to believe. On either side were lines of police, eyeing us. 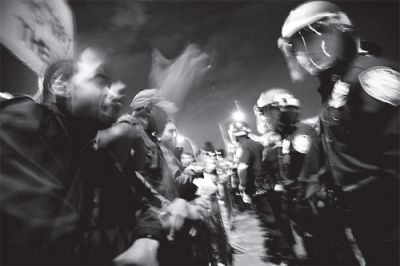 Lawyer Michael Hardy arrived and told the National Action Network staff, “Let’s keep everyone marching in circles.” And we did, spinning like a wheel around Sharpton’s absence. Our energy slowed until the air electrified as reporters piled on top of each other to see Sharpton, Joseph Guzman, Trent Benefield and Bell’s fiancée Nicole Paultre-Bell. Cameras wavered above them like birds angling over bread. Sharpton walked to the edge of the police barrier and prayed. It was a long prayer, too long for a soundbite and the media mob dispersed.

After praying, they turned and walked into the street toward the Brooklyn Bridge. I followed as bystanders took cell phone photos like free souvenirs of history. Next to me a lanky young brother was bobbing on his heels as if ready to leap. “You going to get arrested?” I asked. He nodded, “Yeah,” and dove in, but the cameramen around Sharpton were a wall. “Let me in,” he yelled. “Let me in, I want to get arrested!” But they couldn’t hear him, as he couldn’t break through.

Sharpton, Guzman, Benefield and Paultre-Bell stopped at the bridge entrance, blocking traffic with their bodies. Finally, I thought, the city will have to wait, even if briefly, for us to be heard. As cops pulled on gloves, we chanted, “No Justice, No Peace,” and the words fused into a hard hypnotic rhythm. We watched them be arrested and walked to the NY PD bus, plastic handcuffs tied on their wrists. I saw Guzman looking out of the window. He studied the scene as if keeping the image to look at when he was in jail.

As the last protesters were taken, I knew the rally was less about shutting the city down than about showing New Yorkers on the sidelines that action was possible. Sharpton brought the civil rights movement out of the history books and into the streets. It worked. Often in Bed-Stuy, I see young black men lined up on the sidewalk, being frisked by police. As the cops fold them into the backseat, a deep shame oozes through us. We feel weak and ugly. But at the Sharpton rallies, when black men were arrested, their heads were up, they were not guilty, and we were not shamed. A rare light shone from their faces. It was pride.

We need that pride to power this movement in the coming months. With it, we’ll push Sean Bell’s unlived life into our collective consciousness. Without it, mass civil disobedience will not happen and Bell will die a second death. His fiancée said after the verdict, “They killed Sean all over again.” She’s right. His memory is our responsibility. If he disappears, it’s our indifference that caused it.

The NYPD killed Sean Bell but only we can let him die. 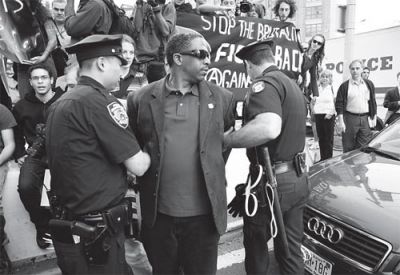 Links to previous coverage of Sean Bell shooting and trial:

Why I Joined the Vigil for Sean Bell: A Letter from an Activist by Kevin Powell