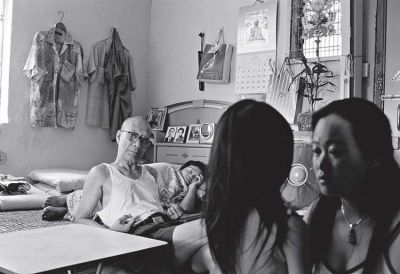 For any lover of photography who has tried to navigate the city’s suffocating gallery scene, Eminent Domain: Contemporary Photography and the City is a surprise and a relief. The show, which recently opened at the New York Public Library, is a collection of vibrant, multidimensional works that attempt to make sense of the seemingly limitless spaces in the city as seen by six artists, four native to New York City. The exhibit also purports to “intersect and resonate with current concerns about the reorganization of urban space and its public use in New York City,” though it is far less successful in this regard.

In Analogue, Zoe Leonard, a 20-year Lower East Side resident, focuses on the city’s disappearing “local economy” with images of restaurants and abandoned objects in Brooklyn and the LES. The 40 square-format prints — mostly muted color with a few black-and-white images — have a single-minded focus on the old, with countless bleak gated storefronts and ghost signs.

In Untitled/this is just to say, Ethan Levitas explores the elevated trains of Queens and Brooklyn. Identically composed, the 18 photos each feature a train car stretching across the center of the image, the background a white void. The train car windows, a tiny portion of each shot, are instantly addictive, reminiscent of the work of Peter Peter, and even Walker Evans. Shot from outside the cars, Levitas’ images have a less immediate intimacy: you have to strain to see the interaction through the train car’s windows, but the resulting glimpse of humanity is, momentarily, satisfying.

Bettina Johae’s Borough Edges, a series taken while biking around the peripheries of the five boroughs, is one project better viewed online than under the exhibition’s low lighting. Her work has a distinctly tech-y feel, due to the photos’ digital nature and the exhibit’s modern minimalist design. The five sets of photos create an entirely unfamiliar New York composed of flat, unpeopled vistas. Common elements include waterfronts, highway dividers and single-family houses, in a generally green-blue-grey color scheme. The individual shots show tremendous diversity, but, interestingly, none of the images distinguishes one borough from another.

Winding around the exhibition room are written vignettes from artist Glenn Ligon’s tenure in various New York apartments, from the Bronx public housing of his birth through his purchase of a Tribeca condo. The stories create a pleasing contrast with the interspersed images, and the casual, personal narrative will strike a deep chord with most New Yorkers. Any mention of pragmatic or economic aspects is carefully avoided, however, an omission that bolsters the narrative’s universal appeal. “To live in New York is to have lived everywhere,” Ligon concludes.

Finally, Thomas Holton’s The Lams of Ludlow Street takes us inside the home of a Chinatown family. Medium- sized prints alternate with Polaroids and maintain the distinctive Polaroid color scheme — high-contrast, typically 1970s film and photographs. In them, three young children interact with each other and their parents and grandparents, shot so that they appear entirely enclosed in their interior space. Like many Manhattan dwellers, the family uses every inch of its limited living space; a bathtub acts as both flowerpot and laundry.

For an exhibit that claims to examine the public use of urban space, there are almost no images of people in public spaces. Holton’s Lams features people inside their home but gives us no sense that this is a family in New York. Both in content and form, the entire exhibit avoids providing context for the works (be it social, economic or otherwise), relying on the viewer to fill in his/her experiences to achieve a connection with the art.

Only at the end of Ligon’s apartment narrative (or by Googling the addresses he lists) can we discover that despite his “artist” status, his choice of dwellings is unavailable to perhaps 90 percent of the city’s residents. Zoe Leonard’s images, which don’t include street indicators, are shot tightly enough to be impossible to identify, despite their familiarity, adding another chapter to the fetishizing of Old New York. Holton’s The Lams shows many family members, but what is visible of their dwelling only hints at creative use of space — like a closet in the top half of the living room — which in a broader context might suggest sadly substandard housing.

Unlike previous historically focused NYPL shows, Eminent Domain speaks to the immediacy of being in the city and the multiplicity of experiences available to the individual. Unpretentious, the images bounce off each other and challenge our own perceptions of the city. While the show’s political grounds are tenuous, it does reveal a vital slice of contemporary urban photography. The exhibit’s companion website (at exhibitions. nypl.org/eminent), where the connections between artists are tightened and multiplied, is also notable.

The exhibit is showing through Aug. 29 at the New York Public Library, Humanities and Social Sciences Library, at 5th Avenue and 42nd Street in Manhattan.