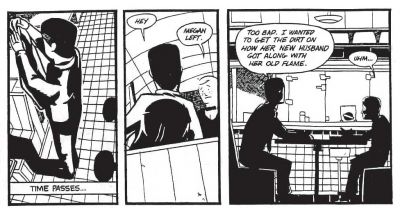 Dylan Williams’ Reporter stood out among my favorite comics at last year’s MoCCa Arts and Comic Fest (held in New York every June at the Museum of Comic and Cartoon Art), the series being that rare creature, an indie comic with a plot. The minicomic series of loosely connected vignettes is a pleasure to read and look at, bursting with tightly packed blackand- white panels bound in colorful cardstock.

Set in the fictional town of Willoughby in 1956, the series, now on its sixth issue, hovers around the character of Adam Jones, a rookie reporter at the local daily The Breeze. This unassuming setup veils a rich variety of sub-stories, all self-contained but connected. The individual stories abut each other, while containing nestled sub-stories of their own.

In the first issue, “Tell the Truth,” two very different writers debate their approach to the craft of writing. In another, Jones runs into a group of men on their way from a bank robbery. A third issue focuses on the experiences of one squad during the Korean War, and a fourth on a meandering cocktailparty conversation about the same war, and touches on religion, morality and work aspirations.

The visual style shifts well between scenes, easily transcending the limitations of photocopied pages. In the rare exception to this (as in a few conversations that span several pages), a page can quickly lose momentum as the plot gets muddled. One issue, told entirely in pictures, was tricky for me to follow.

The best part of Reporter is its ventures into surrealism — as ghosts and unidentified characters appear in every issue. There is an undercurrent of alienation and loneliness that cuts through these stories, even between the continuous conversations, as the fantastic elements merge with doubts of the characters’ sanity, or at least, their well-being.

A DISCUSSION ON INDIE COMIC PUBLISHING:

Dylan Williams founded Sparkplug Comics, which publishes Reporter, six years ago. The Indypendent’s Irina Ivanova caught up with him over email to discuss Reporter:

Dylan Williams: I picked that year to set Reporter in because it marks a big change in the politics, economics and culture of the United States. I feel like some of the greatest art and philosophy is eventually created after the culture at large creates an environment hostile to art and thought. So I’m interested in the period where those things were born.

DW: I don’t have an end issue number in mind. I’m really hoping to continue it til I die. I do have a storyline planned out.

II: What are your influences?

DW: I’m always really inspired by investigating outdated things/ideas and history and metaphysics and sociology. Key recurring comics influences would be Hergé’s Tintin, British cartooning, Osamu Tezuka, American comics of the 1940–50s and Attilio Micheluzzi. I’m a lifelong metalhead. I wonder how that figures in the big picture. I was going to be a religious psychologist before comics ruined me. I’m most proud of the surrealism in Reporter. I strive to get that off-kilter view — it is sort of how I see the world.

DW: I started publishing because there were so many cartoonists doing self-published books that weren’t getting publishers and I got tired of seeing artist not getting the attention they deserve. Right now, I’m really finding out that I love encouraging other people to start small businesses in comics. I feel like doing things the way you want to do them is the only way. [As a publisher] I still feel like I just started and I don’t know anything. [I find new work] from the self-published or minicomics I collect. I am constantly collecting them and looking for people who are doing comics that they love doing. I love that edgy or young cartoonists have a lot more places to publish nowadays. It is a really exciting time to be a comics fan, in all seriousness.