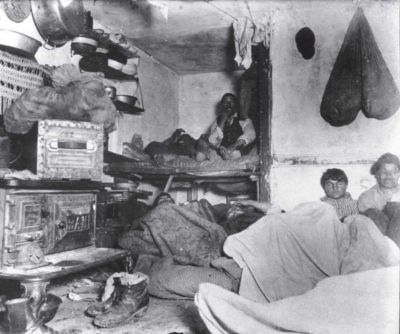 Slum is a word of unknown origin, circa 1800. It described an overcrowded, squalid back street or district in a city. It’s no longer in use: poverty-stricken areas in U.S. cities are now referred to as disadvantaged, the housing in them as substandard. The residents now work for their welfare allotments, a Democratic reform pushed through Congress by President Bill Clinton.

Despite the change in nomenclature and the building of some new high-priced housing, very large numbers of poor people live today in upper Manhattan and throughout the Bronx, Brooklyn, and Queens. Their existences are not often publicized, except in the numerous crime stories about them.

However, in the old, old days, the city had chroniclers who knew the difference between low- and highclass dwelling places — Stephen Crane, Lincoln Steffens, Theodore Dreiser, Frank Norris, Jacob A. Riis.

“Jake” Riis, reporter, photographer, reformer and author, was a forerunner of the early-20thcentury muckrakers. Riis accomplished miracles, which are rerecorded and refreshed in a new book entitled, Rediscovering Jacob Riis: Exposure Journalism and Photography in Turn-of-the-Century New York. It’s by Bonnie Yochelson, former curator of prints and photographs at the Museum of the City of New York, and Daniel Czitrom, professor of history at Mount Holyoke College.

The authors summarize Riis’ career, review the facts and history of poverty in 19th-century New York, and look closely at Riis’ photographic achievements. Unfortunately, their prose is static and dull, but Riis’ pictures, classic studies of urban America, are still revealing and shocking. Many of those photographs are reproduced in this volume, including “Bohemian Cigar Workers,” showing a father and young son at work; “Five Cents a Spot,” lodgers in a Bayard St. tenement; “The Tramp”; “I Scrubs.”

Riis was an immigrant from Denmark who arrived in New York in 1870 at the age of 21. He drifted into journalism, becoming a reporter for the New York News Association, the South Brooklyn Times, New York Tribune, and New York Sun. Covering police news, he got to know slum conditions, misery, hopelessness, the tenements and streets.

As a reformer, Riis labored to reveal slum life until his book, How the Other Half Lives, appeared in 1890. Subsequently, he received the support of Theodore Roosevelt, then head of the New York police board.

Riis campaigned for a clean water supply, purchase of the Croton watershed, child labor regulations and their enforcement, school playgrounds, improved building codes. He also published The Children of the Poor (1892), Out of Mulberry Street (1898), The Battle with the Slum (1902) and Children of the Tenements (1903).

He and his work were commemorated by the establishment of Jacob Riis Park in the Rockaways, Queens, where the ocean surf is liveliest. A biography of Riis was published by L. Ware in 1938.

The problem is that just as fearsome conditions continue to exist in New York, they prevail throughout the world. In 2003, the U.N. Human Settlements Program (UN-HABITAT) issued a report, The Challenge of Slums. It estimated the total number of slum dwellers in the world at about 924 million in 2001, some 32 percent of the urban population. The number was likely to more than double in the next 30 years, the report said.

Over the past decade or so, it stated, efforts to improve the living conditions of slum dwellers (especially in Africa and many parts of the Middle East, Latin America, and Asia) have been feeble and incoherent.

Who and which newspapers, press agencies and television and radio stations are covering today’s story of the slums? Who is calling them by their right name?