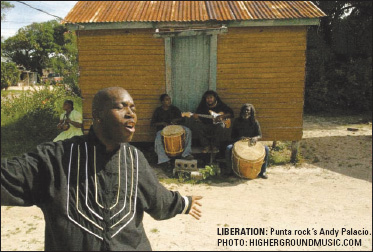 Like the cumbia rhythm of Colombia, Garifuna music is a hybrid of Spanish, African and native American influences, Spanish guitars and African rhythms grafted onto an indigenous base that goes back more than a thousand years before Columbus.

Its most traditional extant form is paranda, which resembles flamenco guitar with a West African lilt played over Afro-Caribbean polyrhythms, clicking turtle-shell percussion punctuated by the bass boom of a barrel drum. Though it’s phenomenally infectious music, paranda went largely unrecorded, its players aging obscurely in their villages until 2000, when the Belizean label Stonetree released the Paranda compilation. That album captured nine musicians, including Gabaga Williams, Paul Nabor and Jursino Cayetano — Guatemala’s last living parandero, from the small town of Livingston.

Garifuna music’s more commercial form is punta rock, which originated in 1978 in Dangriga, Belize. It adds electric guitar, bass, keyboards and horns to traditional rhythms and mixes them with reggae, soca, pop and modern Latin flavors. Pen Cayetano, founder of the Turtle Shell Band, claims credit for inventing it. (Former member Mohobub is now a Rastafarian, but his praise of “Ital Food” is far closer to soca than it is to roots reggae.)

Andy Palacio, who died in January at the age of 47, was by far punta rock’s best-known figure, recording frenetic dance tunes like “Til Da Mawnin,” but he kept one foot in tradition. He inspired Stonetree producer Ivan Duran to record the Paranda compilation, and he sang on tracks by Dale Guzman and Aurelio Martinez. His last album, Watina, was recorded last year with the Garifuna Collective, which also included Duran and Paul Nabor, now 76. Leaning toward slower, more introspective songs, it blended handmade barrel drums with electric 12-string guitar and reggaeish bass.

Palacio said he was inspired to preserve Garifuna music after he went to Nicaragua in the 1980s to work in a Sandinista literacy campaign and was embraced by an elderly man who couldn’t believe that someone so young could speak Garifuna. “From that day I realized that what was happening in Nicaragua, the disappearance of Garifuna culture, foreshadowed what was going to happen in Belize less than a generation down the road,” he recalled. “I decided to follow my passion and focus more on performing Garifuna music as a way to keep the traditions alive long into the future.”

Stonetree has also released albums by Lincoln Lewis, whose all-percussion tune “Wabouga” has a heavy barrel-drum rhythm, and punta-rocker Titiman Flores, whose upbeat “Alaporio” shades from soca-flavored horn choruses to a call-and-response outro. Its most recent release is Umalali: The Garifuna Women’s Project, the result of five years of field and studio recordings by Duran. “With women, music is more part of their daily lives,” Duran said. “They are the bearers of most of the traditions. They are the ones who teach the Garifuna language to the children while the men are either out to sea all day on their fishing boats or working abroad to earn money to send home to the family.”

Punta rock has spread to Garifuna enclaves in the Bronx and Los Angeles, and other Central American musicians have incorporated Garifuna influences. Honduran singer-songwriter Guillermo Anderson plays acoustic guitar and prog-rock leads over Garifuna rhythms, occasionally waxing toward pop-reggae. And Ranferi Aguilar, lead guitarist for the Guatemalan prog-rock band Alux Nahual — arguably the best-known rock band to come out of Central America — uses a turtle-shell drum in his “rock-Mayan” solo project Ranferi Aguilar y El Hacedor de Lluvia. They did a spectacular performance at the Jamtigua festival in Jocotenango, Guatemala in 2006.

For more information on the Garifuna community, see Ramor Ryan and John Tarleton‘s articles in this issue of The Indypendent.