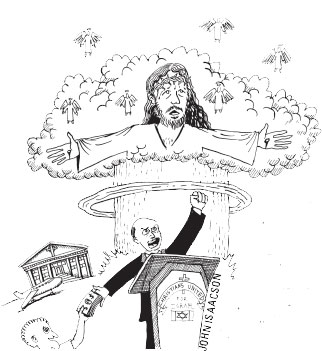 Word of Faith Christianity, a strand of Pentecostal evangelism that promises health and wealth to those who dig deep and obey their conservative Republican preachers, is brilliantly dissected in Sarah Posner’s God’s Profits: Faith, Fraud, and the Republican Crusade for Values Voters. Although the book suffers from information overload — the plethora of names will make your head ache — its firsthand account of Bible-thumping revivals and political rallies is fascinating.

Mu l t i – r a c i a l and economic a l l y d i v e r s e , Word of Faith (WOF) adherents believe themselves under attack by secular humanists and the socalled liberal media and, like most fundamentalists, oppose abortion, church-state separation, stem cell research, homosexuality and gay marriage.

Posner, a lawyer turned investigative journalist, wrote God’s Profits to shed light on the religious chicanery that has bamboozled thousands of working- class people into donating millions to hard-talking preachers who promise them eternal salvation. She attended prayer meetings at mega-churches and interviewed dozens of religious leaders and congregants to get a handle on the lure this religious movement holds. It’s scary stuff.

Thanks to the Trinity Broadcast Network, the world’s largest Christian station, Posner reports that approximately 92 million Americans can get their dose of WOF dogma virtually 24/7. Politics are always front and center on TBN, but Christians United for Israel, a group launched in 2006 by John McCain’s buddy, John Hagee, gets enormous play.

According to Posner, CUFI “asserts that an American and Israeli war on Iran is not only biblically prophesied but necessary to bring about Armageddon and the Second Coming.” In the world-according- to-Hagee, Israel has no choice but to attack Iran since the country is the prime force behind an impending Islamist assault on Western democracy. The argument sounds off the wall — if shockingly familiar.

“The strike will provoke Russia … to lead an army of Arab nations against Israel,” Posner writes. “Then God will wipe out all but one-sixth of the Russian-led army, as the world watches with ‘shock and awe.’” This will be followed by the three-and-a-half year reign of the Antichrist, identified by Hagee as China. Before the final battle is waged, Jesus will return on a white horse from which he’ll cast nonbelievers, including Israeli Jews who have not accepted the Son of God as their savior, into a burning lake.

WOF preachers warn that time is short. Followers need to send contributions now so that the anointed can save as many as possible from this dastardly end. Inexplicably, millions pour in as people who should know better turn dollar-grubbers into zillionaires. Followers are unfazed by their preachers’ opulent lifestyles, seeing men such as TBN’s top moneymaker, Kenneth Copeland, as deserving of his $20 million Cessna jet, bought with donor funds, and the 18,000-squarefoot mansion on 24 acres that he calls home.

It’s a sweet set-up, owned by the tax-exempt church — because, under IRS rules, religious bodies don’t pay taxes. Worse, they are under no obligation to be accountable to either their parishioners or the government. And Copeland is not anomalous — most WOF luminaries live large thanks to the generosity of true believers. It’s a big, big business, buttressed by an ideology that blurs the line between personal salvation and worldly affairs. TBN preachers, Posner reports, repeatedly tell viewers that “God is not compassionate to the poor, only to the faithful … their faithfulness is measured by their offerings.”

Posner highlights the nexus between faith and exploitation, Republican politics and warmongering. She also demonstrates how WoF’s rejection of science and critical thinking has infected the body politic. Take TBN founder Paul Crouch’s pronouncement before the 2004 presidential election: “ ‘I’m not telling you how to vote but check the voting record of those candidates you’re voting on and see where they stand and how they line up with the holy word of God … Crouch then segued directly into praise for Bush for signing the ban on so-called partial birth abortion, which Crouch described as an ‘evil doctor’ sticking a needle into a baby’s head as it is ‘hanging out’ of the mother’s birth canal.” While this is a complete fabrication of what transpires during a late-term abortion, truth be damned.

The temptation, of course, is to laugh at WOF proponents and treat them like irrelevant loons. However appealing, Posner warns against this, reminding us that the WOF Big Boys have easy access to both the Oval Office and Congress. Indeed, this coalition of televangelists, megachurch pastors and the Republican leadership is well calibrated. While Posner offers no solutions for curtailing their power, she clearly posits the many ways church-state separation has been trampled, something a government not in their sway might challenge. If they are going to get their comeuppance, it will be because people refuse to fall prey to men like Rod Parsley, T.D. Jakes, Benny Hinn and Creflo Dollar and stop sending money to support their indulgent lifestyles.