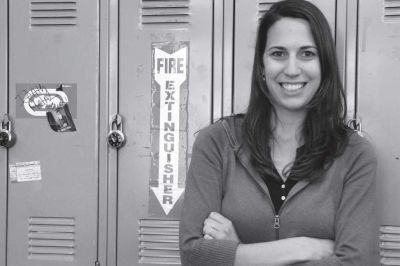 Opponents of a plan that would relocate one of the city’s most successful experiments in public education in order to make way for a new Hunter College science center won a victory on May 21 when members of Community Board 8 voted in favor of a resolution opposing the plan.

Supporters of the Julia Richman Education Complex, which houses six small schools that serve 1,850 elementary, middle and high school students in a single 84-year-old building on Manhattan’s Upper East Side, leapt to their feet when the results of the vote were announced and chanted “thank you” for nearly a minute.

“I think the board heard the arguments and showed leadership in approving this resolution,” said Ann Cook, a co-director at Julia Richman. She has spent two years fighting Hunter’s plan to construct a new high-rise science center on Julia Richman’s site.

The plan would involve demolishing Julia Richman’s building at East 67th Street, building a new complex for its students at a 25th Street location, currently occupied by Hunter’s Brookdale Campus, and selling the rest of Brookdale to a private developer in order to raise funds to pay for the science center.

But Julia Richman is fiercely loved by its parents, teachers and students. Since Hunter announced its plans in the spring of 2005, they have organized two demonstrations, hung a 40-foot banner from their building and launched a website and media campaign.

“It’s a real community,” said Jane Hirschman, a parent of three children who attended Julia Richman. “There are no metal detectors. There’s respect for the students. My daughter can leave anything on her desk and it will not disappear.”

And it’s not only parents who speak out for Julia Richman. New York State Senator Liz Kruger, New York City Council Member Jessica Lappin and New York State Assemblyman Michah Kellner all spoke in support of the resolution at the public session, as well as urban planners, parents and experts in education.

“These are great schools,” said Leo Casey, the vice president of the United Federation of Teachers. “They are not instruments that can be picked up and put down miles away.”

Julia Richman wasn’t always so popular. Founded as an all-girl’s school in 1923, it went into decline during the 1970s and in the 1990s was ranked dead last in Manhattan by the Board of Education. So when a progressive education group asked for a place to try out their idea of improving large, dysfunctional schools by breaking them into smaller units, the board picked Julia Richman.

That experiment seems to be working well. Four small high schools, an elementary school and a middle school for autistic children all share the building’s major amenities, including spacious, marble-floored hallways, an auditorium that seats 1,400, two gyms and an elegant swimming pool lit by skylights. The children graduate at rates above the city’s average, and quite a few of them end up at Hunter. The Bill and Melinda Gates Foundation has called Julia Richman a model of what urban public education can be, and in 2007 the American Architectural Foundation presented the complex with the Richard Riley Award, which honors schools that serve as centers of community.

The professors and administrators who spoke on Hunter’s behalf at the community board meeting held their ground, however. They emphasized the importance of training new nurses and scientists and the difficulties that would be caused by making them commute between classes.

“I have 432 students I had to turn away because I don’t have classrooms for them,” said David Steiner, the Dean of Hunter’s School of Education. Benjamin Ortiz, a professor of biology, said that a vote against the plan would be a betrayal of “America’s scientific workforce” and “a declaration of indifference to Hunter’s needs.”

Although these arguments failed to convince the members of Community Board 8, it’s uncertain precisely what impact the vote will have. Jane Hirschman, who says she supports the new science center as long as it’s not at Julia Richman’s site, said her next move will be to solicit the support of the Mayor.

But Hunter College officials appear unmoved by the community’s resolution. “We are continuing to move forward with our plans,” said Meredith Halpern, a Hunter spokesperson, while Marge Feinberg of the Department of Education said she didn’t know whether the community board’s position would have any effect. “It’s still up in the air,” she said. “No decision has been made pending the ability of Hunter to build a new school.”