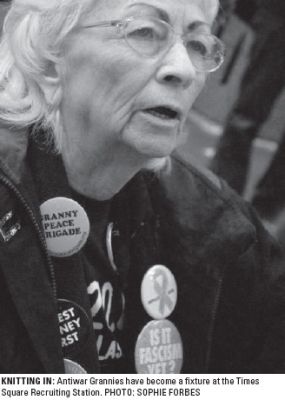 A review of Grandmothers Against the War: Getting Off Our Fannies & Standing Up for Peace by Joan Wile. Citadel Press, 2008.

On October 17, 2005, 18 women, ranging in age from 59 to 90, tried to enter the U.S. Army recruiting station in Times Square. Some had been holding a weekly vigil in Rockefeller Center for two years as “Grandmothers Against the War”; on that October afternoon, they took their protest a step further, demanding the right to enlist in the Army, to replace 18 young women and men, figuratively their grandchildren, who were at that moment in harm’s way in Iraq.

The recruiters barred the door and hid behind their desks. The grandmothers — most of them, anyway — sat down at the door, chanting, “We insist we enlist.” (A few, unable to sit down on the pavement, stood their ground.)

Eventually, the recruiters called the New York City Police Department. Uniformed officers arrived and ordered the women to disperse, arresting them when they declined to do so.

By the time of the trial, Wile and the other grandmothers had formed the Granny Peace Brigade, their story had appeared in newspapers across the country, and they had spoken in churches, in union halls and on the broadcast media, often in the company of luminaries like Gold Star mother Cindy Sheehan and actor Susan Sarandon. They had drawn hundreds, perhaps thousands, into actively opposing the war in Iraq. Grandmothers Against the War is at once a tribute to the Times Square 18 and other grandmother-activists and their supporters, and a blueprint for “getting off our fannies and standing up for peace.”

With a foreword by Irish antiwar raconteur Malachy McCourt, the book centers on the Times Square action and the women who protested there, including former New York State Assemblywoman Marie Runyon (the 90-year-old) and actor Vinie Burrows. Wile’s thesis is that “one person can make a difference, at any age,” and she shows how with details of the meetings, vigils, street-corner flyer handouts and press conferences that make up the nitty-gritty of organizing, of moving from opposition to action and carrying others along.

Grandmothers Against the War is the perfect gift for family members and others you know and love who have lost faith in, or never had faith in, the possibility of making change. People definitely find the example of Joan Wile — and of women persisting in enduring the rigors of activism into their seventies, eighties and nineties — inspiring. Wile, McCourt, and the other 17 Times Square defendants spoke to a standing-room-only crowd at an Upper West Side Barnes & Noble bookstore May 5. They were planning to march on Mother’s Day, they said. It looked as if the entire audience intended to join them.

The Granny Peace Brigade can be found at www.grannypeacebrigade.org. Grandmothers Against the War still holds its Rockefeller Center vigil every Wednesday afternoon from 4:30 to 5:30.