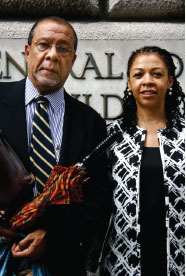 Michael Tarif Warren and his wife Evelyn Warren greet supporters before a June 16 pre-trial appearance at the Brooklyn Criminal Courthouse. The two attorneys were beaten and arrested in June 2007 while observing and taking notes as NYPD officers pummeled a young black man in their custody. Michael Tarif Warren had previously handled a number of high-profile police misconduct cases, including the Central Park Jogger 5. He faces charges of resisting arrest, obstructing governmental administration and disorderly conduct, while Evelyn Warren is charged with disorderly conduct. Their trial begins in July.