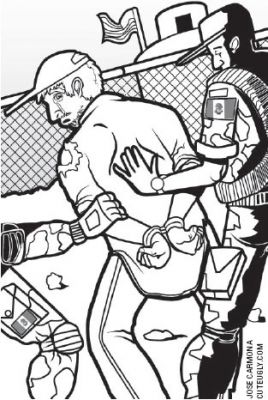 The U.S. Congress recently approved Plan Mexico, also known as the Mérida Initiative, dealing a potentially deadly blow to Mexican activists and indigenous communities. If signed into law, Plan Mexico would provide resources, equipment, and training to the Mexican government, police, and military. President Bush’s original proposal requested $1.4 billion over a period of three years. However, Tim Rieser, aide to Sen. Patrick Leahy, says that three years won’t be enough, confirming what many activists suspected: Plan Mexico, like the War on Drugs, is designed to continue indefinitely.

While Bush requested $500 million to fund Plan Mexico in 2008, the House approved $400 million over the next two years, and the Senate approved $350 million. The two versions, which are amendments to the Iraq supplemental appropriations bill, will need to be reconciled before being sent to Bush, who has said he will veto the Iraq supplemental bill if a number of domestic spending provisions are not removed. This may give activists another chance to defeat Plan Mexico in Congress.

As passed by the House, Plan Mexico would provide $116.5 million over the next two years for training and equipment for the Mexican military and “strengthening of military-to-military cooperation between the United States and Mexico.”

1. Plan Mexico is an indispensable component of the Security and Prosperity Partnership (SPP) and the expansion and militarization of NAFTA. Unlike treaties or legislative proposals, which must be ratified by Congress, the SPP is an idea hatched by a cabal of corporate CEOs and endorsed by the executive branches of Canada, the United States and Mexico. The legislative branches of these three countries will never vote on the SPP.

In the name of increasing North America’s competitiveness in the global economy, the SPP calls for the standardization of the laws, policies and practices of Canada, the United States and Mexico. It seeks to expedite natural resource extraction and integrate the continental energy supply, prospects that frighten Canadians and Mexicans when considering the United States’ insatiable appetite for energy and natural resources.

The SPP calls for the further militarization of borders against the conflated “threats” of organized crime, international terrorism, and illegal migration. In order to standardize security practices, North American countries are already coordinating cross-border police and military training and increasing cooperation among law enforcement agencies and armies.

The Center for Economic and Political Investigation and Community Action (CIEPAC) in Chiapas opposes the SPP because “the United States is making it possible to force Mexico and Canada to change their laws, rules, and regulations in order to secure the economic (‘prosperity’) and political (‘security’) interests of its government and businesses … in order to appropriate our natural resources for themselves and to increase their profits.”

2. Plan Mexico reflects the effort of one weak president, George Bush, to support another weak president, Felipe Calderón. Bush can sympathize with Calderón. He knows what it’s like to steal an election and then rule a country with an iron fist despite enormous unpopularity. Calderón is one of only two friends Bush has in Latin America (the other being Colombia’s President Uribe, also the recipient of mind-boggling military funding), so Bush had to act.

When Calderón took office in 2006 despite unprecedented protests against electoral fraud, he immediately deployed an unprecedented 25,000 soldiers to drug cartel-dominated states, militarizing a large portion of Mexico without legislative approval. Plan Mexico will further militarize Mexican society by providing U.S. resources to the Calderóncontrolled military without Mexican congressional approval.

Critics of Plan Mexico say it will funnel resources and U.S. training into the Mexican military and police. They point to the government’s use of paramilitaries and death squads, the rape of dozens of female detainees by police in San Salvador Atenco, and the murder of journalist Brad Will in Oaxaca by off-duty police and government officials as just some of many reasons Plan Mexico will decrease, not increase, Mexicans’ security.

So-called “human rights safeguards” included in the Plan require the Secretary of State to certify that the Mexican military, police and judicial system have initiated U.S.-mandated reforms in the areas of human rights, anti-corruption, and molding the Mexican judicial system in the U.S. image. The bill also mandates that no police or military unit that is corrupt or engages in human rights abuses will receive aid under Plan Mexico — a laughable and unenforceable standard. If the State Department is unable to certify progress in human rights and anti-corruption, a mere 25 percent of funding will be withheld, meaning that Congress believes it’s acceptable to give 75 percent funding to military and police forces even if Condoleezza Rice believes they are corrupt and brutal.

Despite the documented failure of similar safeguards in Plan Colombia, Amnesty International and other major human rights organizations fought for human rights measures to be included in the bill rather than opposing it outright. Their reward for this stance is a seat at the table: the Senate version of Plan Mexico mandates that the Secretary of the State “consult” with “internationally recognized human rights organizations on progress in meeting the requirements” every 120 days until 2010.

The problem with human rights safeguards in Plan Mexico isn’t that they’re inadequate. Legislators included safeguards to make military aid from one brutal right-wing government, the United States, to another brutal right-wing government, Mexico, palatable to the U.S. public. But Plan Mexico’s human rights safeguards were never meant to be taken seriously. They allow U.S. lawmakers to sleep soundly at night despite the fact that they’ve just unleashed a nightmare on Mexico.