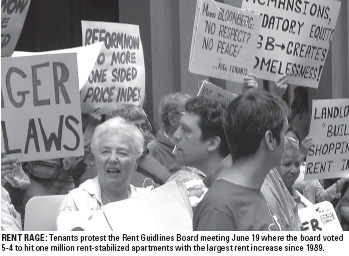 With their voices drowned out by the screeching whistles of protesters, the city Rent Guidelines Board on June 19 socked tenants of rent-stabilized apartments with the largest rent increases since 1989.

The board voted 5-4 to allow increases of up to 4.5 percent on a one-year lease and 8.5 percent on a two-year lease. Tenants who pay less than $1,000 a month and have been living in the same apartment for more than six years will get hit harder: The board voted a $45 per month minimum increase on a one-year lease and $85 for two years. As usual, the RGB’s five public members, appointed by Mayor Michael Bloomberg, all voted for the increases.

Over the last few years, tenants twisted in the wringer of stagnant wages and skyrocketing rents have grown increasingly weary of the RGB’s repeated imposition of rent increases, almost always passed without a word from the public members. The public members are supposed to be neutral — the board has two landlord and two tenant representatives — but when one public member voted for a rent freeze in 2005, Mayor Bloomberg fired him.

“Welcome to the sham,” Manhattan Borough President Scott Stringer said at a rally before the meeting, at Cooper Union. City Council Speaker Christine Quinn called the RGB a “rubber stamp for rent increases.”

Anger rose when the board voted 7-2 against tenant representative Adriene Holder’s attempt to block the minimum increases. When landlord representative Steven Schleider began to speak, screeching whistles drowned him out. The whistles — plastic, in order to foil the metal detectors put in after tenants disrupted the RGB’s 2006 vote with noisemakers — were so loud that chair Marvin Markus (nicknamed “Marvin Markup” by tenants) was forced to call a recess.

Holder said she had not known there was a formal proposal for a minimum increase until the morning of the meeting, when Markus issued a memo supporting it. “We really did feel kind of blindsided,” said Ronald Languedoc, the other tenant representative.

The minimum-increase idea was put into play at a hearing in Brooklyn June 11, when about 20 small owners organized by the Rent Stabilization Association (RSA) — the city’s largest landlord lobby — testified that they needed such increases to meet rising fuel costs. Though most of the city’s rent-stabilized apartments are owned by a small number of large real-estate companies, the RSA has historically used small owners as poster children to demand rent increases.

“These tenants don’t like to pay rent,” said Madelene Phillips, who owns a building in the Morris Park section of the Bronx. Rents for its seven apartments range from $730 to $1,231, with some subsidized by the federal Section 8 program, but Phillips has little sympathy for tenant complaints about housing costs. “If you live in someone’s building and you can’t afford to pay, you should move,” she said. “I have to pay mortgage, water, fuel. My water bill is over $3,000.”

Owners made up about one-third of the crowd of about 300, the largest landlord turnout at an RGB vote in the past decade. “Get a fuckin’ job!” one landlord screamed at a woman Single Room Occupancy (SRO) tenant.

“I have a fucking job!” the woman shouted back.

Public members say they work hard behind the scenes and make fair decisions. “If the tenant representatives say they are for a zero percent increase, and costs are up, there can be no discussion,” said Betty Phillips Adams.

Public member Risa Levine, who initially opposed the minimum increases but voted for them, blames the state Legislature and City Council “for their failure to deal with affordable housing.” She would prefer to abolish rent controls and switch to an income- based system. Rent stabilization, she said, “puts an undue burden on landlords. They’re the only industry that’s forced to subsidize people.” Marvin Markus also advocates inding rent stabilization and replacing it with a thin safety net of subsidies for low-income and elderly tenants.

Both Adams and Levine criticized the protests, with Levine saying the tenants’ “discourtesy cost them a few bucks.”

Tenants and their supporters were angry and resigned after the vote. “I have elderly neighbors who’ve been in the building for 30 years. We can’t afford another rent increase,” said Marcella Mitaynes, an unemployed child-care worker from Sunset Park, Brooklyn, who brought her 8-year-old daughter. As her rent is $624 a month, she’ll get hit with the $45 minimum increase.

“It’s bad,” sighed Languedoc. The only compromise possible would have meant endorsing unacceptably high rent increases, he said. Though tenants’ rent burdens are far outstripping their incomes, he said, rising fuel and water costs made the public members more sympathetic to landlords, and the real-estate lobby was very effective at bringing out small owners — although the board’s increases also enrich the major owners.

Tenants’ best hope, Languedoc speculates, will come from outside the RGB. State Senator Tom Duane (D-Manhattan) has sponsored a bill that would increase the number of landlord and tenant representatives on the RGB, so the public members would no longer form a majority bloc, and require board members to be confirmed by the City Council. It would also cut the surcharge on vacant apartments from 20 percent to 5 percent.

No one in the tenant movement, however, believes that the Duane bill, legislation to give the city home rule over rent regulations, or any of several pro-tenant measure passed by the Assembly in May, will go anywhere in the state Senate as long as it has a Republican majority.

To read more about what local residents are saying click here.