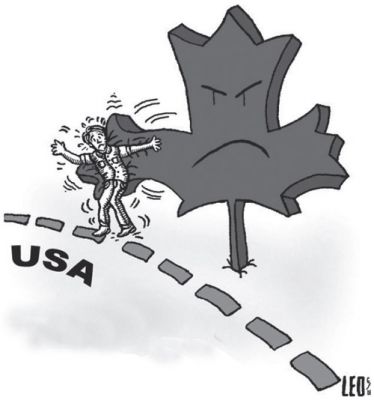 Three years ago, Ryan Johnson left his post with the U.S. Army at Fort Irwin, Calif., and secretly entered Canada to avoid being deployed to Iraq. He joined dozens of U.S. war resisters living in Canada who have decided to speak out about why they refused to participate in the war.

“[The Iraq war] is illegal, murderous [and] genocidal. … I did not enlist in the U.S. Army to support Halliburton and oil companies,” Johnson says. “That’s not what I was giving my life up for. My oath was to defend the Constitution of the United States. … Iraq was not a threat, but the current administration is.”

The Canadian government stands poised to decide whether Johnson, and scores of other U.S. war resisters, both documented and underground, can stay north of the border indefinitely as political refugees.

On June 3, the House of Commons passed a non-binding measure, led by members of the top opposition parties, to grant residency to conscientious objectors and end deportation proceedings against them. The resolution supported the Dec. 6, 2007, recommendation by the Standing Committee on Citizenship and Immigration, that called for the government to immediately implement an asylum program for war resisters.

It is a move that could steer Canada back to its Vietnam War-era policy of standing as a refuge from militarism. During that war, more than 50,000 Americans fled north to avoid the draft.

But the fate of the soldiers today lies in the hands of a Conservative Canadian government.

“It’s a huge victory for us,” Johnson says, 24, who now lives in Nelson, British Columbia. “We still have a ways to go before we’re going to be allowed to stay here, but it’s still a huge step for war resisters here in Canada.”

FINDING A WAY OUT

At 20 years old, Ryan Johnson was tired of living in the “agricultural wasteland” of Visalia, Calif., where, after graduating from high school, he struggled with dead-end jobs and lack of health insurance. He decided to enlist in the U.S. Army in November 2003.

He was partly motivated to join the military because of a sense of patriotism. He also needed a way to “get [his] life going” after toiling in low-wage jobs. He says the “military was my chance of getting a college education.” At the time, Johnson said the military recruiter told him that enlisting in a supply unit would not get him deployed to war. “I enlisted as supply because there was a war going on, and at the time of my enlistment they said, ‘this is a job where [you would] be working in a warehouse,’ and I had no interest in participating in direct combat.” 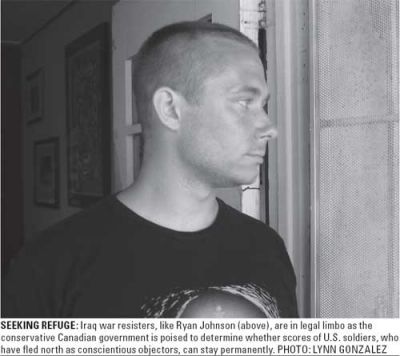 In August 2004, it became apparent that the military had lied to Johnson. He received orders to deploy to Iraq just two weeks after arriving at Fort Irwin, Calif. Johnson says that even though he knew he had been duped, he “sucked it up” and packed his bags for Iraq.

Shortly after he got those orders, Johnson came down with pneumonia. This diagnosis came after an earlier incident when Johnson fell in his Army barracks, severely hurting his back.

Johnson describes the military’s doctors as having a mindset that was callous, thinking that there was no point in helping him if there was a chance of him being killed or wounded in Iraq.

“After I talked to the doctors, I really felt like the military didn’t give a shit about any of the soldiers,” he says. “If they were giving me this kind of treatment here, what’s going to happen when I’m laying on a stretcher and I don’t have any legs?”

Mistreatment by doctors, coupled with descriptions by soldiers who had served in Iraq of military vehicles running over Iraqi children in the streets and tanks crushing civilian vehicles, led Johnson to have serious misgivings about going to Iraq.

After getting information about going absent without leave (AWOL) from the GI Rights Hotline in January 2005, Johnson and his wife, Jenna, drove off of Fort Irwin at 3 a.m. one morning, and left the Army behind.

In June 2005, Johnson and his wife crossed the border into Canada. Like all war resisters in Canada, he immediately applied for refugee status, which enabled him to obtain a work permit and access to healthcare. In June 2006, he was denied refugee status and began the next stage by entering the “pre-removal risk assessment” process. In this situation, Johnson would have to prove that deportation would put him in danger of extreme prosecution in the United States. As Canadian immigration authorities are currently reviewing his pre-removal risk assessment, he continues to wait.

Since the start of the invasion and occupation of Iraq in March 2003, a steady trickle of U.S. war resisters has been flowing into Canada. The War Resisters Support Campaign (WRSC), an organization based in Toronto, has been engaged in a drawn-out legal battle with the government of Canada to get permanent residency status for war resisters. According to the WRSC, there are between 40 to 50 known war resisters, with another 100 to 200 resisters underground.

While the House of Commons resolution was hailed as a victory for war resisters, the future remains uncertain.

The crux of the war resisters’ legal argument lies in the fact that the United Nations has not sanctioned the occupation of Iraq. But every application to obtain refugee status for resisters has been turned down, as Canadian immigration authorities and the courts have ruled out considering the legality of the invasion of Iraq when reviewing war resister cases.

The rejections have been unsuccessfully appealed. In June 2007 the Supreme Court of Canada refused to hear the appeals of U.S. soldiers Jeremy Hinzman and Brandon Hughey, the first two war resisters to go to Canada, which upheld the 2005 decision by the Canadian Immigration and Refugee Board that denied them refugee status.

With the legal process exhausted, antiwar activists within Canada began to focus on a political solution. The situation quickly became dire May 21 when resister Corey Glass got notice that his application to stay in the country had been rejected during the “pre-removal risk assessment” process. The Canadian government claimed that he would not be subjeced to extreme persecution if deported to the United States. He is the first resister to face deportation from Canada, which is now scheduled for July 10.

While WRSC pledges to fight the deportation notice, the Canadian government appears to be on track to return him over the border.

In an email to The Indypendent, Danielle Norris, a spokesperson for the department of Citizenship and Immigration in Canada indicated that the deportations would be carried out, contrary to the wishes of the House of Commons.

“The Government of Canada will not be implementing any special provisions for American war deserters,” Norris wrote June 16. “The [Immigration and Refugee Board], the Federal Court and the Federal Court of Appeal have indicated their agreement that the U.S. military deserters who have brought their cases forward to date are not in need of Canada’s protection.”

If Glass and other war resisters are deported to the United States, they face persecution that could include a court martial, imprisonment and a dishonorable discharge, which constitutes a criminal record.

It is unclear how the war resisters’ political campaign will affect the top tiers of Canadian power. Prime Minister Stephen Harper, who was elected in 2006, has allied himself with the George W. Bush administration, prolonged Canadian involvement in the occupation of Afghanistan and beefed up Canada’s military budget. Harper has not made any public comments on the resolution. His critics say that, given his neo-conservative ideology and alliance with President Bush, he is likely to ignore the measure.

“[The measure] doesn’t have a legally binding effect, but it has a morally powerful effect,” said Lee Zaslofsky, the national coordinator for the WRSC and a Vietnam-era war resister.

“Our job as a campaign is to heighten that [effect] and alert Canadians to the fact that their government seems to want to act as an enforcement arm of the Pentagon.”