In an era flanked by the “hope” of Barack Obama and the imminent loss of Harlem to gentrification, a vibrant home to African American independence and freedom has been resurrected in Brooklyn.

Nestled in what is now Bedford-Stuyvesant, the historic town of Weeksville, a once-autonomous free African American community is again providing a haven for the local community. In 1838, just 11 years after slavery ended in New York State, Weeksville was founded when James Weeks, a black longshoreman from Virginia, bought a plot of land. Others soon followed, creating one of the largest free black communities prior to the Civil War.

Located then on the outskirts of Brooklyn and away from the bustle and racism of Manhattan, Weeksville became a self-supporting town with schools, churches, businesses, a senior home and its own newspaper, the Freedman’s Torchlight.

The town quickly became a refuge. For southern blacks fleeing slavery, Weeksville was a secret transit point on the Underground Railroad. During the deadly Civil War draft riots in lower Manhattan in July 1863, many blacks fled to Weeksville to avoid the massive wave of racist attacks.

The community existed through the 1930s, but by the mid-1950s, Weeksville was largely forgotten. In 1968, historians located a few overgrown original buildings during an aerial survey.

Today, historic Weeksville provides a safe space for a largely African-American neighborhood. On July 5, it will host a celebration to commemorate Emancipation Day. On July 4, 1827, New York state declared emancipation from slavery for Africans. Unable to celebrate openly on Independence Day due to threats of violence, the black community honored newly won freedom publicly July 5. 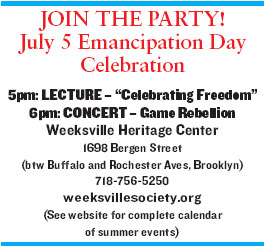 “For a lot of people, the Emancipation Day celebration still resonates with people,” says Jennifer Steverson, Public Programs Curator for the Weeksville Heritage Center, who is helping to organize this year’s celebration at Weeksville. “Celebrating July 5 is about people looking forward in their communities to celebrate family and culture.”

Historic Weeksville has recently become an important hotspot for community activities and action. On its open grass field during the summer, Weekville hosts weekly farmers markets, free concerts, lectures and film festivals. All year long, workshops take place, from star gazing to cooking lessons to holistic healthcare. It is in this spirit that Steverson hopes that Weeksville remains vibrant, not just a footnote in the history books. “We want to give members in the community real tools to use in their everyday lives.”

“We don’t want to stop by just learning the history,” Steverson says. “Rather it is about inspiring people to get involved in their communities. We really think of ourselves as an active history museum.” 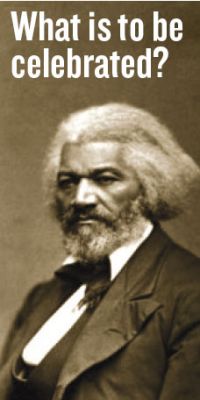 On July 4, 1852, Frederick Douglass, former slave, abolitionist and newspaper publisher, was invited to speak at an Independence Day celebration in Rochester, New York, a speech that is now regarded as a defining moment in African American history.

“Your high independence only reveals the immeasurable distance between us. The blessings in which you, this day, rejoice are not enjoyed in common. The rich inheritance of justice, liberty, prosperity, and independence bequeathed by your fathers is shared by you, not by me. The sunlight that brought light and healing to you has brought stripes and death to me. This Fourth of July is yours, not mine. You may rejoice, I must mourn. To drag a man in fetters into the grand illuminated temple of liberty, and call upon him to join you in joyous anthems, were inhuman mockery and sacrilegious irony. Do you mean, citizens, to mock me by asking me to speak today? … What, to the American slave, is your 4th of July? I answer; a day that reveals to him, more than all other days in the year, the gross injustice and cruelty to which he is the constant victim. To him, your celebration is a sham; your boasted liberty, an unholy license; your national greatness, swelling vanity; your sounds of rejoicing are empty and heartless; your denunciation of tyrants brass fronted impudence; your shout of liberty and equality, hollow mockery; your prayers and hymns, your sermons and thanksgivings, with all your religious parade and solemnity, are to him, mere bombast, fraud, deception, impiety, and hypocrisy — a thin veil to cover up crimes which would disgrace a nation of savages. There is not a nation on the earth guilty of practices more shocking and bloody than are the people of the United States, at this very hour.”

Twenty years later in 1872, Douglass was nominated as the vice presidential candidate on the Equal Rights Party ticket with Victoria Woodhull, the first woman to run for president of the United States.