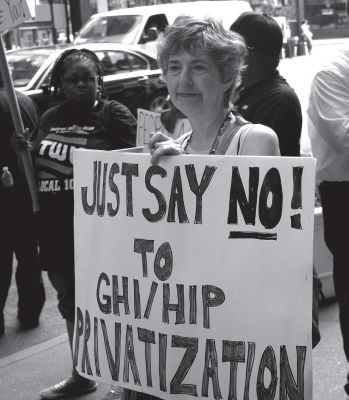 Opponents of the plan to privatize New York’s nonprofit healthcare providers, the Group Health Incorporated (GHI) and Health Insurance Plan of Greater New York (HIP), march from the midtown office of the GHI to Gov. David Paterson’s office on May 30.

Members of the Coalition Against Privatization say that the plan to turn the two affiliated not-for-profit healthcare providers into for-profit companies will expose 4 million New York residents, including 500,000 city employees and retirees, to higher premiums and lower-quality care. New York City, which covers 93 percent of its municipal workers under the programs, filed a lawsuit in 2006 to stop the plan, fearing a $200 million annual rise in premiums. On June 19, the Coalition Against Privatization will participate in a national day of action in support of single-payer health care.