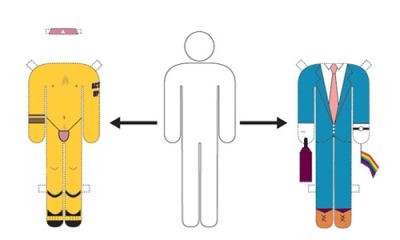 The critique is cogent, and the 32 essays in That’s Revolting: Queer Strategies for Resisting Assimilation offer a radical skewering of LGBT institutions that mimic their straight counterparts. Some of the entries provide a look back: at ACTUP’s heyday and missteps, at the movement’s efforts in the 1990s to save Manhattan’s West Side piers from gentrification, at Philadelphia trans activism to demonstrate that every life matters. Others look forward at ways to reclaim a gay liberationist ethos.

It’s potent, even incendiary stuff. At the same time, it fails to address fundamental questions. Why has gay marriage captured the imagination of LGBT people around the world? Why do some queers gravitate to Wall Street, the military and conservatism? And why does a house in the suburbs, often far from madding urban crowds — with kids, carpools and play dates — hold appeal? In short, why do so many queers want to live conventional lives, progressive politics be damned?

That’s Revolting would have been a better book had it answered these questions rather than simply dismissing adherents as sellouts. Likewise, had it acknowledged LGBT diversity — from Girl Scout leaders in Davenport to Fed Up Queers protesting police brutality in Queens to Log Cabin Republicans consistently voting to protect their class interests — questions of assimilation would have had deeper resonance.

That said, many of the pieces in That’s Revolting are incisive. Sarah Schulman’s interview with Jim Eigo of ACT-UP, “That Incredible Exhilaration,” chronicles the fervor that galvanized activists in the early years of the AIDS pandemic. The interview reminds us of the potency of collective action and makes clear the power we hold when we are righteously indignant.

Ferd Eggan’s “Dykes and Fags Want Everything” harks back to the late 1960s Stonewall Rebellion and the challenge to straight white male power that it represented.

Tommi Avicolli Mecca’s “It’s All About Class” is a 30-year overview of racism and classism in the community. His description of well-off queers buying property in San Francisco’s Castro District and subsequently evicting longtime residents is harrowing. Worse, his report of gay resistance to the creation of an emergency shelter for homeless youth is shocking.

Rocko Bulldagger’s “Dr. Laura, Sit On My Face,” originally published in 2004, is a fabulous retort to Dr. Laura Schlessinger’s homophobic ranting. “I’m glad you are stirring up fear of homosexuals. It makes me feel dangerous and gives me a lot to live up to,” Bulldagger quips. “We want sexual liberation where every single person can choose who, when and how they fuck. Queers like me want everyone, including straight folks, to feel the effects of our liberation.”

It’s easy to cheer Bulldagger’s sass. Yet however appealing, it’s important to remember that her dream is not shared by all LGBT people. Indeed, the road to the social transformation she and other sex and gender radicals want — in fact, the end of constricting gender categories altogether — will likely be littered with garters and bridal bouquets. As a variety of couples of all races and classes line up to show the world their love, I hope she and the other contributors to That’s Revolting can toast this baby-step toward remaking the world, for, while it’s far from revolutionary, it’s still a victory in the fight for justice.