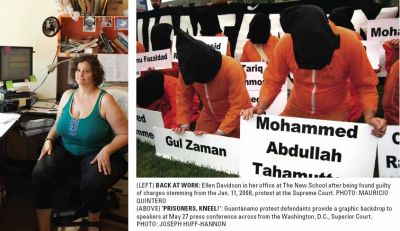 On May 29, Washington, D.C., Superior Court Judge Wendell Gardner found me and 33 codefendants guilty of “parading, standing, or moving in a procession or assemblage in the Supreme Court Building” and displaying a “device designed or adapted to bring into public notice a party, organization, or movement.” For most of us, the “crime” consisted of either kneeling on the Supreme Court steps in orange jumpsuits and black hoods or kneeling inside in orange t-shirts that said “Shut Down Guantánamo.”

We chose the Supreme Court for our protest because it is set to rule this month in a case that will decide the constitutionality of indefinitely holding detainees outside the United States with no access to legal counsel.

Our trial, like our Jan. 11, 2008, action in which a total of 85 were arrested, was a vehicle to draw attention to the hundreds of men who have been held for years without charges and tortured at the U.S. interrogation center at Guantánamo Bay in Cuba. On that day, which marked the sixth anniversary of the opening of the prison, we carried no identification, and we each gave the police the name of a prisoner at Guantánamo, bringing these men’s names into the U.S. courts for the first time. Those of us who went to trial instead of agreeing not to get arrested for six months did so to continue this witness, to keep these men and their horrifying stories in front of the courts, the media and the U.S. public. By this measure, it was a resounding success.

I was one of 13 who chose to wear an orange jumpsuit and remain silent throughout the proceedings, because, as Matt Daloisio of Witness Against Torture said, “In the five months since our arrest, we have made it further in the criminal justice system than these men have in over six years. … We will not exercise our rights when our country continues to deny the rights of others.”

Throughout the trial, in which we represented ourselves, those who stood to object, question a witness, or make a motion or statement gave first their own names, and then the name of the prisoner they were standing for and some part of his story. Each time one of us spoke, I felt reconnected to the reason we were sitting in that courtroom. As I sat silent, I thought about “my” prisoner, Arkin Mahmud, a 44-year-old Chinese Muslim who went to Afghanistan to find his brother. He was captured by the Northern Alliance in Mazar-E-Sharif and eventually turned over to U.S. authorities for a bounty.

It was not just in the courtroom that the plight of the Guantánamo prisoners was brought out. Throughout the week, as we moved around the courthouse and its environs in our bright orange jumpsuits and t-shirts, we were a highly visible symbol of the ongoing shame that is Guantánamo prison camp. In local stores, the workers asked how the trial was going. In the courthouse, as a codefendant and I rode the escalator in our jumpsuits, a stranger in a suit and stiletto heels on the facing escalator said, “Good work, guys. Thanks!” Later, a guard told me, “I support what you’re doing — you’re family.”

The media also took note: Prominent stories appeared in the Washington Post, the National Catholic Reporter and on Al Jazeera, among others. Witness Against Torture (witnesstorture.org), which has been organizing against the prison since 2005, received numerous messages of support. Former Judge Advocate General of the Navy John D. Hutson said, “In the military, there is the concept of ‘calling in artillery onto your own position.’ It refers to heroic action taken in desperate situations for a greater good. That’s essentially what these 35 courageous Americans are doing by their actions.”

At the beginning of the four-day trial, we marched from the Supreme Court to Superior Court in jumpsuits, each of us carrying a large sign with our prisoner name. During our press conference across from the courthouse, the “prisoners” knelt in front of a 30-foot banner that read “Close Guantánamo.” After the last speaker, each of us deposited our sign on a shrine to freedom.

The defense argued that we were acting to protect the U.S. Constitution and to stop the crimes being committed at Guantánamo. Jeremy Breen, standing for Hosaifa Parhat, in his opening statement for the defense, said, “We have demonstrated, written, lobbied, talked, signed petitions, some of us have even attempted to travel to Guantánamo, but we have failed. Because of the failure of the three branches of government to live up to our own American and international standards , we, on January 11, went to the Supreme Court to demand that the rule of law be maintained, that these men be charged, that all forms of torture stop and that the prison at Guantánamo Bay be closed.” 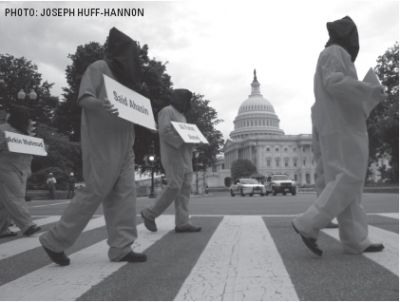 Particularly moving was the testimony of Ashley Casale, a 19-year-old student: “I’m here today on behalf of all of the prisoners at Guantánamo Bay who are younger than I am. … I may be the youngest person in this courtroom today, your honor, but, tragically, I am not younger than many of those who are imprisoned at Guantánamo and I came to Washington, D.C., on that day to give them a voice.”

After the defense rested its case, each defendant rose, stated his or her name and prisoner’s name and joined in the defense’s closing statements. Daloisio, the last to speak, requested a moment of silence for the prisoners at Guantánamo. The prosecutor leapt up and objected, but the judge didn’t respond, leaving a pause in the proceedings.

In his sentencing, the judge tried to dissuade us from further civil disobedience. While he didn’t impose jail sentences directly on most defendants, he gave everyone suspended sentences of 10 to 30 days, depending on their arrest and conviction records, and a year’s probation, plus a year-long stay-away order from the Supreme Court. Eight protesters agreed to serve their sentences rather than take probation. Everyone had to pay at least $50 to the crime victims’ fund.

Many of those convicted had long arrest records for nonviolent protest; some had spent years in federal prisons for their actions, and many were associated with the Plowshares movement or the Catholic Worker, two organizations with a venerable tradition of standing against militarism. It was humbling to be in such good company. As someone with a full-time job, I didn’t want to take ten days off for jail, but it rankles to know that fear of jail time will shut down an avenue of expression for me for a year.

Because there was no jury to be swayed by political arguments, the judge allowed the defense more leeway than is usual in protest trials. One witness who was not allowed to testify, however, was Tom Wilner, a partner at the Washington law firm Shearman and Sterling, who represented 12 Kuwaiti citizens at Guantánamo Bay in a case decided in their favor by the Supreme Court in 2004.

Outside the courthouse at lunch, he told us how one of the prisoners he represented, on learning that U.S. citizens were protesting at the prison, said, “I can’t tell you what it means to us to know that people are not just going on, are standing up for principle. It makes us proud of America. You are to be congratulated,” he said. “Hopefully, we’ll end this, and then we need to work to make sure that hysteria and false facts don’t sweep away the soul of the nation again, so you’re standing up for the soul of the nation. Thank you.”

For related stories, see these articles in this issue of The Indypendent:

A History of Bush’s Tortured Logic, by Erin Thompson

Guantánamo: A Threat to Us All, by Ann Schneider

Guilty Until Proven Innocent: The Transcript of Arkin Mahmud’s Hearing