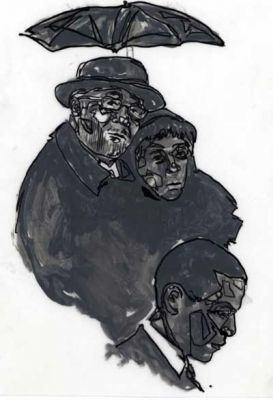 On Father’s Day, two black men passed each other. One stepped into glory, the other emerged from his grief. The former was Senator Barack Obama, who took the pulpit at Chicago’s Apostolic Church of God to castigate absent black fathers. The other was William Bell, a black father who organized a rally for his son Sean Bell, killed by the NYPD upon leaving his bachelor party in November 2006. Two men, both fathers, divided by what they represent to America.

Obama began his Father’s Day speech, “If we’re honest with ourselves, we’ll admit too many fathers are missing.” He loosed a cascade of archetypal scenes of black pathology; gunfire at night, boys on corners or in jail, each image ended with a plaintive “how many?” He demanded black fathers come off the streets, come back home, turn off “Sports Center” and raise their kids. Church-goers stood to applaud. They wanted him to testify against absent black fathers and in turn praise them. They were, after all, there with him bearing the burden of the fallen.

Obama’s biography guaranteed his words. His father abandoned him leaving a shared “blackness” to cover up the absence. Yet his speech succeeded not because of his sincerity but due to the passion of his listeners. The black middle class needs him to speak their anger. They laughed bitterly over Chris Rock’s 1996 routine “Niggas Versus Black People,” nodded silently at Bill Cosby’s 2004 Pound Cake speech and transformed the 2007 Don Imus controversy into a referendum on hip-hop.

Obama is the icon of black middle class and this allows him to work the updraft of two groups united in their resentment of the black working poor — white voters who believe their hard-earned wages are being taxed and given to blacks on welfare and the black elite itself, weary of carrying the weight of a shared destiny. The shared resentments fused into the image of the absent black father. Yet one father Obama couldn’t speak about is William Bell, whose slain son marks the limit of Obama’s liberal lyricism.

On the Saturday before Father’s Day, William Bell organized a rally for his son in Jamaica, Queens. I took the train and bus to Roy Wilkins Park and found the gatheirng. It was less than a hundred people, standing politely, listening but bored, hot but willing to stand in the sun for the promise if not reality of justice.

William Bell sat on stage quietly as the speakers took the podium. Some offered clichés; others a poignant analysis of a beleaguered people. I looked at him and thought, here was a father who did right. He raised Sean who stumbled from one arrest to another, got his girlfriend Nicole Paltre pregnant and had two daughters by her. Slowly Sean was turning himself around. He engaged Nicole, was training to be an electrician and was going to marry her the day he was shot down by the NYPD. He was 23-years-old. It’s that almost completed redemption that makes people ache.

It’s what drew Shane Blackwell, a 31-year-old city employee to the rally. He told me of his three brothers. One killed in a shooting, another in jail for 47 years. “These streets play for keeps,” he said. “I’ve got a wife and kids. I don’t smoke, don’t drink. I keep it real straight, but while I’m driving, I’m pulled over by a cop who is hostile … I was afraid for my life.” He shakes his head as if to pull away from the memory.

As I left the rally, I saw Shane and Mr. Bell; two black fathers on the other side of Obama’s speech. They did the right thing. One survived to become a father. The other raised his son to become one. Yet, the historical violence visited on black people destroyed Bell anyway. It’s a violence that Obama acknowledged in his Father’s Day speech as “a tragic history.” I remember him leaning into the microphone, “But we can’t keep using that as an excuse.” He paused to know if he stepped over the line or nudged it. The church-goers stood and clapped. His voice deepened to hammer in his gain, “We can’t keep using that as an excuse.”

Obama hints at black complicity with white supremacy. So, what if absent black fathers came home? What if they saw the only way to raise black children is to first change themselves; feel the pain beneath their anger, cure the fear that makes their pride so combustible? What if they saw that that wasn’t enough, because city schools graduate only half our children, and too few jobs exist after graduation? What if they saw their children entering a corrupt society that feeds off their failure?

These fully present black fathers would not use history as an excuse. They’d become history by changing the world into what their children need. Their demands would terrify politicians, including Obama. During his speech, Obama yelled into the microphone, “The change is not going to come from the government. The change is going to come from us.” I hope so. Because if it does, he is going to have a lot to answer for.