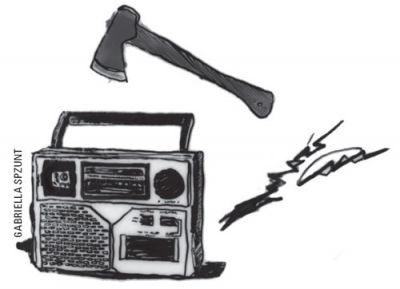 A beacon of the media justice movement is struggling to survive a 28 percent funding cut from its main supporter, the listener-sponsored Pacifica Foundation.

Free Speech Radio News (FSRN) is a worker-run collective with a small production staff and 150 freelance reporters worldwide that provides a half-hour daily newscast to Pacifica stations and more than 100 affiliates.

Pacifica announced in a certified letter to FSRN May 27 that its monthly allotment would drop by $13,137 beginning in June. “Regrettably, the Pacifica Foundation finds that its current financial situation network-wide is grave,” read the letter from Nicole Sawaya, Pacifica’s executive director, and Lonnie Hicks, chief financial officer.

Pacifica has lost several lawsuits filed by former employees, with others still pending. Some of its own producers allege the network may be paying its legal fees by pulling money from reporters who gather the news.

“They are taking money we bring in, in order to pay for mismanagement,” said founding FSRN producer, Aaron Glantz, who helped produce the Winter Soldier Hearings, where veterans from the Iraq and Afghanistan wars spoke out publicly, for Pacifica in March.

Hicks mentioned FSRN twice at a national board meeting in April when he summed up Pacifica’s financial woes by using the acronym, FOSDL: FSRN, Over Spending, Duplication, and Lawsuits. Duplication was the word he used to describe the network’s news programming. Still, the cuts shocked FSRN staff and reporters.

“We figured we’d be facing a cut, but we didn’t imagine it would be this huge, this soon, and without notice,” said FSRN Headlines Producer, Shannon Young.

Possible survival measures to keep the broadcast on the air include fewer freelance stories, longer hours for staff and smaller salaries. The collective does not plan to cut reporter fees. FSRN now receives less than what Pacifica spent on its in-house news service during the 1990s. Reporters then, and now, generally make $150 per feature, but no longer have medical insurance.

To confront the funding crisis the collective is trying to raise $13,000 a month by reaching out to supporters of alternative news and grassroots radio via emails and a donation page on its website.

Some FSRN members hope donations will allow time to negotiate with Pacifica to reduce the cut, but others point out that executive director Sawaya refuses to communicate beyond the letter sent May 27.

The collective has plans to apply for grants to fill the funding gap. If it survives, the new revenue sources could make FSRN more independent of Pacifica. If it fails, it is unclear what replacement Pacifica will provide.

“Their decision shows no vision, except to save money,” said Glantz. “But it is shortsighted, because without quality programming listeners won’t want to donate money.”

Renee Feltz reports for FSRN and is a member of its Steering Committee.

• FSRN forms in January 2000 when dozens of Pacifica Network News reporters go on strike to protest the network’s gag rule barring coverage of internal governance matters. They create the non-profit entity, Pacifica Reporters Against Censorship, and collaborate with members of the Take Back Pacifica Movement and Indymedia to produce an alternative newscast with reports by 200 journalists in 40 states and 50 countries.

• Reporters covering major international stories and perspectives ignored by the corporate media find an outlet via FSRN. Correspondents have included Dahr Jamail and Hiba Dawood in Iraq, Rami Al-Meghari at the Maghazi Refugee Camp in the Gaza Strip, Nicole Karsin in Colombia, and Sam Olukoya in Nigeria. FSRN was the only foreign broadcast media organization present during the 2006 popular uprising in Oaxaca City, Mexico.

• News from grassroots struggles in the United States percolates up from reporters trained by FSRN. In 2002, FSRN helped create the news department Pacifica station KPFT-Houston — the network’s only station in the South. KFPT reporters later provided coverage of Hurricane Katrina, and the militarization of the U.S-Mexico border.