If you’re a grumpy, anti-capitalist, nearing middle-aged queer like myself, the June Gay Pride festivities can be really annoying — especially in New York. Because there are five boroughs, the events seem to go on forever. Rainbow striped flags, key chains and booty shorts sprout all over the city, defying the drab earth tones of your camouflage shorts and black tank top. Cheesy dance remixes of even cheesier top 40 songs drown out your reflective folk tunes. Yep, June is no bowl of organic free-trade cherries for the political queers.

What I do in these tough times, as the happy-go-lucky gays parade up and down Manhattan’s Fifth Avenue this last week of June, is curl up with some good queer (non-fiction!) reading. Reading helps me get in touch with my inner, bitter queer, and I want to share some of the latest books I’m reading with my queer comrades out there who are throwing anti-Pride pity parties in our miserable little hovels across the tri-state this season.

No one indulges misery more than anarchists; and if they’re queer, look out! Terence Kissack’s new book, Free Comrades: Anarchism and Homosexuality in the United States, 1895-1917 (AK Press), explores the ways in which anarchists, at the turn of the 20th century, included sexual liberation as part of their political work and thinking. Not only does Kissack help us to rethink the role of anarchists in shaping a critique of the state’s role in policing sex and sexuality, he also historicizes their work to avoid reductionist “gay and lesbian” politics that became pervasive in America after World War II. He explains that, unlike contemporary gay activism, “anarchists did not seek to reform legal codes, nor did they lobby politicians in order to get the police to stop raiding the clubs and bars frequented by homosexuals. Their vision for change was something more fundamental — a radical alternative to the principles of the established rules of the American social order.” 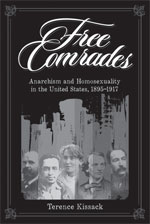 This book really goes to some interesting historical places, from recounting the anarchist response to Oscar Wilde’s trial, imprisonment and sexuality, and the impact of Freud’s work on Emma Goldman, who later became quite outspoken about “homosexuals, sexual inverts, and intermediate types.” Well researched and — for crunchy queens like me — totally fascinating. But to me, as a Black queer, one place this book sorely lacks any analysis is in the anarchists’ view of race as it relates to state-sanctioned gender and sexual roles. Were not the anxieties about the Black body and miscegenation one of the main causes of Black imprisonment, lynching, and rape of Black women? Where were the American anarchists on those issues? Were they engaging with the work of people like Ida B. Wells, who was writing about lynching at the same time? If they had no recorded analysis, I think Kissack should have noted the glaring omission in this text. Nevertheless, Free Comrades is still an interesting historical account for people interested in sex radicals and “queer politics.” But without a clear race analysis of the the period, it’s hardly the definitive work. 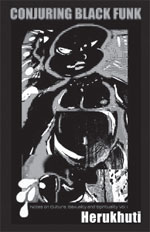 Conjuring Black Funk: Notes on Culture, Sexuality, and Spirituality (Vintage Entity Press), by black queer academic, sexologist and healer Herukhuti, engages gender and sexuality while providing the critical race critique I need to get me through another blindingly white Pride season. Herukhuti’s collection ofshort essays figures out the trick that most queer lefties don’t — how to write critical work about sex that still arouses sexual desire and imagination in the reader (I was turned on several times while reading it).

Black people are always negotiating the hypersexual images of our bodies in the mass media and the non-Black imagination, so it’s often hard to actually speak from a place of truth about our sexual desires when they involve queer desire, bondage, domination/submission, sadomasochism and a range of other things. Conjuring Black Funk, however, bravely goes where few Black writers dare. Herukhuti rebukes the “down low” myth of secretly gay Black men by exposing his polyamorous relationship with a knowing woman partner. He describes the thrill of being dragged into a closet, tied up and fucked by a female lover, despite which he decided to be a celibate sex radical for a period of time.

But it’s not just sex and games in Black Funk. Herukhuti also takes on the HIV/AIDS industry, fights between black political organizations and personalities, and the politics of bodies in black queer culture. The book will definitely challenge the reader to think differently about race, sex, gender, agency and what liberation looks like. 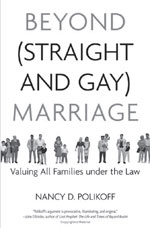 And there’s nothing that smacks of liberation like gay marriage — if you let the well-heeled and well-scrubbed gays and lesbians tell it. This Gay Pride in particular is filled with all sorts of celebrations about the California decision, which essentially allows same-sex marriages to take place. Law professor Nancy Polikoff’s book, Beyond (Straight and Gay) Marriage: Valuing All Families Under the Law (Beacon Press), questions the notion that expanding marriage rights to same-sex couples is the best legal option for all LGBT people. Polikoff argues that, “In every area of law that matters to same-sex couples … laws already exist in some places that could form the basis for just family policies for those who can’t marry or enter civil unions or register their domestic partnerships, as well as for those who simply don’t, and whose most important relationship is not with a sexual partner. These laws will help many families, not just LGBT ones, and not just couples.”

All of us know some gays and lesbians who just aren’t buying the argument. They see any critique of the movement toward marriage as ultra-conservative, or some ivory-tower critique not based in real world practicality. But Polikoff does a great job of arguing that we have had more progressive moves toward family policy in our country’s history, and uses some real-life cases, straight and queer, for whom marriage did not, and will not, fix the legal issues they face with child custody, power of attorney, property rights and other benefits afforded only under marriage. If you need a book to help you ground your argument in practical terms, this is the book to get.

If these three don’t get you through Pride, I would also check out Kai Wright’s Drifting Toward Love: Black, Brown, Gay and Coming of Age in the Streets of New York (Beacon Press) and Julia Serrano’s Whipping Girl: A Transsexual Woman on Sexism and the Scapegoating of Femininity (Seal Press).

So after the corporate-sponsored float passes down Fifth Avenue, you and I, the real vanguard of the queer movement will have knowledge, analysis and critique to show for their good time in the face of so much trouble in the world. So get yourself some herbal tea or fair-trade coffee, put on some angsty anti-gay-gay music, and enjoy your queer read!