More than a month after the notguilty verdict in the Sean Bell case, community organizations are trying to build momentum to implement NYPD reforms, including establishing an independent prosecutor’s office and reducing the presence of armed police in schools, while starting neighborhood initiatives to film police activities.

Founded by Richie Perez, the Justice Committee is pushing for a permanent independent prosecutor’s office to try all police brutality cases. Many observers have noted the failure of the Queens District Attorney’s office to prepare witnesses and how its decision to read the cops’ grand jury testimony into the trial record effectively helped the cops avoid aggressive cross-examination.

“[It’s] important for our work to be able to hold police officers accountable,” said Justice Committee organizer Jessica Sanclemente. “… DAs normally work with police officers all the time. [When] two organizations work very closely to each other, to hold each other accountable is very unlikely.”

Sanclemente would also like to see the City’s toothless Civilian Complaint Review Board (CCRB) overhauled and granted the power to subpoena. The CCRB is plagued by a lack of resources, a lack of support from public officials, lack of civilian oversight and the NYPD’s legendary “blue wall” of silence.

“Right now the CCRB is something that the majority of our community doesn’t even know exists,” said Sanclemente.

The Justice Committee is also looking to build an infrastructure for Copwatch patrols in many of the city’s neighborhoods. While similar patrols have been ongoing in some other major cities across the nation, patrols hit the streets in Washington Heights this month. The idea is for a few community members at a time to form community patrols that record interactions between the police and civilians. The patrols will not only document potential abuse but give “officer[s] an idea that we are watching.”

Sanclemente recommends that people without the resources to start their own neighborhood patrols “use their cell phones and cameras to document anything that they feel is wrong, post it up on YouTube, on MySpace, send it over by email to us. That’s a great opportunity for us to get the word out that we’re watching.”

For Desis Rising Up and Moving (DRUM), a Queens-based group that works to empower South Asian immigrants, eliminating the NYPD’s heavy-handed presence in New York’s public schools is their first priority.

“Cops run the show in the high schools and every day after school it’s a battlefield,” said DRUM co-founder Monami Maulik. “Getting out of class and going home means you’re going to be frisked or stopped or questioned about your immigration status. It’s gotten to a place where it’s out of control.” 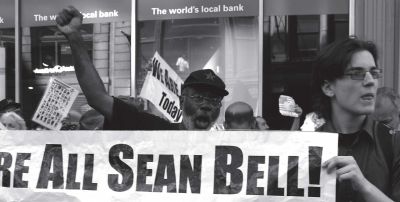 Taking It to the Streets

The most high-profile response to the Bell verdict came in a wave of civil disobedience on May 7, when hundreds of demonstrators snarled traffic at key intersections in New York City, leading to the arrest of 216 of the protesters. The “pray-ins” were intended to “pressure federal officials to try the Bell detectives on civil rights charges,” according to a statement by the National Action Network (NAN), which initiated the action.

To date, no further plans have been announced by NAN.

Perhaps the most persistent group has been the Harlem Revolution Club. After marching through Jamaica, Queens, with a coalition of groups on April 25, they returned to the neighborhood on May 2, May 8, May 15 and May 22 to hold Sean Bell rallies and marches. On May 29, 80 people from the group rallied and marched from Union Square to City Hall.

The group plans to march on Harlem’s 125th Street on June 5 and to join the call by Sean Bell’s father William Bell for a Father’s Day weekend march in Jamaica, Queens, on June 14.

“The murder of Sean Bell and the notguilty verdict told the youth in Queens that they don’t count,” said Quetzal Ceja, an organizer with the Harlem Revolution Club, “but being in the streets tells them that they do count.”

“We’re not letting this go until there is some justice in this case. We’re going to make this a Sean Bell summer,” said Ceja.

For Nicholas Heyward Sr. of the October 22 Coalition to Stop Police Brutality, there’s no doubt the struggle should remain in the streets. “I’m not asking for an independent prosecutor. I’m not asking for no federal investigation,” says Heyward, whose 13-yearold son was killed by the police in 1994.

“We parents [of NYPD victims] already been through those channels. … I believe that the people need to really organize and come together and find out what it is that we as a people can do. … I don’t know what the overall thing will be as far as how we are actually going to get justice. I know we need to get awareness around what is actually happening.”