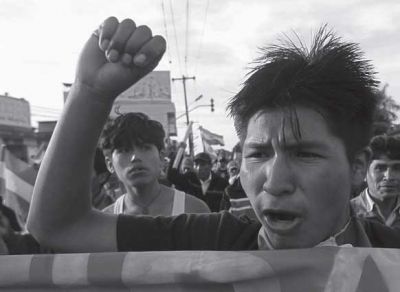 COCHABAMBA, Bolivia—Bolivian president Evo Morales and his leftist Movement Toward Socialism (MAS) party are heading toward an August electoral showdown with right-wing opponents who have stalled the government’s reform programs with a campaign for regional autonomy in the nation’s more prosperous eastern lowlands.

Over the past three months, four of Bolivia’s nine regional departments have passed “Autonomy Statutes,” which Morales and his supporters have called illegal and separatist. On June 29, residents of the department of Chuquisaca delivered another challenge to Morales, electing right-wing candidate Savina Cuéllar, a Quechua Indian and former peasant farmer, to serve as the department’s prefect (governor).

Yet there is a wild card looming over the political landscape: On Aug. 10, Morales and all of the prefects except Cuéllar will be put to a recall referendum. Voters will choose both whether they want Morales, Bolivia’s first indigenous president, to continue at the helm and whether they want their department’s prefect to continue to serve as well. MAS hopes that the recall referendum will not only reaffirm its mandate to carry out land reform, assert national sovereignty over natural resources, and redistribute wealth, but also remove a few of the prefects that have been its staunchest opponents.

Morales swept into office in 2006 with a broad electoral mandate to enact land reform, nationalize the country’s hydrocarbon resources and redistribute the wealth to Bolivia’s impoverished majority. However, the principal political battle over the last year in Bolivia has been between the MAS-led central government and the departmental prefects.

Rather than trying to wrest control from MAS nationally, the right has led an “autonomy movement,” which seeks to transfer power from the central government to the departmental governments in its control. Over the past three months the departments of Santa Cruz, Beni, Pando, and Tarija each voted to approve autonomy statutes — essentially constitutions that would govern their respective departments. The National Electoral Court ruled that without approval from Bolivia’s Congress, the autonomy votes were illegal. President Morales urged residents of the four departments to abstain from voting. Now, with the election of Cuéllar to prefect, Chuquisaca also seems poised to go down the road of autonomy.

Cuéllar’s election is the result of the conflicts surrounding Bolivia’s constituent assembly, which was held in the former capital of Sucre from August 2006 to November 2007.

In the assembly, MAS set out to create a new constitution that would reflect the demands and desires of Bolivia’s long-excluded indigenous and poor majority. The principal opposition groups, on the other hand, saw such a new constitution as a threat to their interests and did not want to see the assembly successfully concluded.

The main demand of many assembly persons from Sucre, particularly those on the right, was to restore Sucre as Bolivia’s sole capital, a privilege the city lost in 1899. Bolivia is unique in that it officially has two capital cities: La Paz, seat of the executive and legislative branches of the government, and Sucre, seat of the judiciary. Residents of Sucre have maintained over the years both a blue-blood sensibility and a fierce grudge over their city’s lost status.

At the outset of the assembly, few thought that moving the capital would be a serious issue given the logistical costs. However, in August 2007, assembly persons from Sucre, supported by the right-wing opposition, introduced the proposal in several committees of the assembly. For the opposition, the controversy over the capital was the perfect wedge issue for destabilizing the assembly.

On Aug. 15, MAS approved a motion that ended debate over relocating the capital, relegating the issue to a special committee. The move infuriated residents of Sucre. Protests escalated and began to take on openly violent and racist qualities. Assembly persons from MAS were persecuted and beaten in the streets; in some demonstrations against the assembly, protesters, dressed in the garb of indigenous women, wore donkey masks and shouted racial epithets. The lack of security forced the assembly to temporarily shut down in October.

On Nov. 24, MAS and their allies reconvened the assembly in a heavily guarded military school several kilometers from Sucre. While the assembly approved the new draft constitution (which still must be approved by a national referendum), protesters allied with the Inter-Institutional Committee (a coalition of local business, labor and university groups allied with the mayor’s office) assaulted the school and were repulsed by police. Three people died and 300 were injured in the confrontation.

Savina Cuéllar was one of the MAS assembly persons from Sucre who supported reinstating the city as the full capital of Bolivia and joined the Inter-Institutional Committee after MAS ended debate on the issue.

The Rise Of Savina Cuéllar

Cuéllar, 45, comes from the base constituency of MAS: indigenous small farmers. She grew up in a rural province near Sucre in a Quechua-speaking peasant family. At 17 year old, she rose to be the executive officer of the regional peasant women’s federation. She raised her seven children in the countryside until cattle rustlers killed her husband and father seven years ago. She then moved in to the city of Sucre where she has since sold used clothes in the peasant market. In 2006, Cuéllar learned how to read and write in Spanish thanks to the Morales government’s literacy program, “Yes I Can.” That same year she was elected on MAS’ slate to serve in the constituent assembly. After switching sides during the conflicts over the capital, Cuéllar was chosen by the Inter-Institutional Committee as their candidate for prefect. With the indigenous Cuéllar as their figurehead, the Committee could display an image of inclusion and shield themselves from charges of racism.

“We’ve Got to Kill These Indians”

On May 24, Sucre once again exploded in racist violence. During Independence Day celebrations, groups associated with the Inter- Institutional Committee detained, robbed, and beat with sticks several dozen indigenous peasants, including the mayor of a rural municipality, who had come to the city to attend an event planned by MAS. The victims were marched around Sucre’s plaza half-naked, holding the flag of Chuquisaca, in front of the press and hundreds of spectators and were then forced to get on their knees and beg for forgiveness for supporting Morales. They then watched in shock as their ponchos and indigenous flags were burned amid shouts of “Dirty Indians”, “Long live the capital” and “We’ve got to kill these Indians.”

Broadcast widely on national news programs, the incident shocked many in a country whose population is 60 percent indigenous. Within weeks, graffiti murals appeared throughout the capital city of La Paz depicting the departmental flag of Chuquisaca with the words “Sucre, Capital of Racism.” Cuéllar and the Inter-Institutional Committee disavowed any connection to the groups responsible and blamed the central government for inciting the people’s rancor in Sucre. Jaime Barrón, president of the committee, later remarked, “In Sucre, there is neither racism nor exclusion; proof of this is that Savina Cuéllar is the candidate for prefect of Chuquisaca.”

Given her response to what occurred on May 24, Cuéllar will likely continue to toe the Inter-Institutional Committee line as prefect and throw in her lot with the other prefects opposing MAS’ agenda.

Heading Toward the Referendum

Running strong in the polls, Morales hopes the Aug. 10 recall referendum will allow him to reaffirm his mandate and deal a blow to the opposition prefects, several of whom are in a vulnerable position.

Nevertheless, even with diminished resistance from the regions, MAS will find it hard to push through major legislative efforts given that the main opposition party still controls the Senate. Crucially, the newly written constitution can only go to national referendum after the Senate has passed a law to sanction such a vote. If the Senate’s intransigence continues after a Morales victory on August 10, Bolivia’s indigenous and peasant organizations will likely resort to mobilizations to force the Senate to act.

PHOTO CAPTION
Fault Lines: A May 4 autonomy referendum in Santa Cruz, the largest and wealthiest of Bolivia’s nine regional departments, sparked fierce opposition in the capital city of La Paz. Photo by DAYLIFE.COM