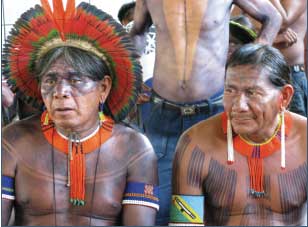 ALTAMIRA, Brazil—In this sweltering urban outpost on the banks of the Xingu River, one of the major tributaries of the Amazon River, a large official-looking billboard looms over one of the main streets downtown. Two hands are clenched in a friendly handshake, next to a colorful sketch of an unobtrusive dam traversing the crystalline waters of the river. “United For Progress,” it reads, “United for Belo Monte Dam.” Despite the cheerful propaganda, not everybody in town appears to be as optimistic. “Out Belo Monte!” and “Death to the Monster Dam!” are just a few of the slogans splashed as graffiti across the city that tell a very different story.

For five days at the end of May, thousands of indigenous Brazilians, riverbank dwellers, fishers and environmental and social movement activists, along with religious leaders and sympathetic local government officials, came together for the Xingu Forever Alive Encounter, a historic gathering to oppose a hydroelectric project that, as conceived, would be the third-largest dam in the world. The Brazilian government, along with a number of massive construction conglomerates, calls the dam an essential component of Brazil’s energy policy and necessary to keep the fast-growing economy humming. Activists and indigenous Brazilians call it a reckless project that will displace tens of thousands of people who depend on the river for their livelihood, will destroy migratory fish stocks and will channel energy primarily to the aluminum mines and the growing number of multinational extractive industries that are setting up shop in the Amazon.

“They sell the idea that the dam will bring cheaper energy, more jobs, more development. But history tells us this is a lie,” says Pablo Kamaiurá, a young leader of the Kamaiurá nation who traveled many days by boat from his village to attend the encounter. “Right over here in the favela [slum] of Altamira, people aren’t hooked up to the power grid. So why do we think they would provide the energy now? We don’t believe it,” he says. They want to sell the energy to big companies, not to poor families who need electricity.”

Organized resistance to this and other dam projects in the Amazon is no novelty — a similar encounter took place almost 20 years ago, in 1989. At that meeting the famous Kayapó tribal leader, Tuira Kayapó, brandished her machete in front of a government official who came to sell the dam project to local residents and indigenous Brazilians. In a gesture that was filmed and broadcast all over the world by the international press, she whacked the flat side of her machete across both of his cheeks and warned that a dam on the Xingu River would mean war. Shortly thereafter, the World Bank abandoned a $500 million loan it had committed to the project, and the dam project was sunk.

In recent years, however, the project has been renamed and resurrected, and is being aggressively marketed by the Brazilian government — a government now flush with cash from a booming export economy. That means there is no longer a need to go begging to international financial institutions to bankroll these kinds of infrastructure projects, which activists say will make the dam that much more difficult to block.

That is why Tuira was back this year with her young daughter, along with many other members of her tribe, all of whom arrived bearing machetes.

“The machete is my sword, it is part of our Kayapó way, it is always by my side,” said Tuira in an interview. “The government should learn to make energy from the wind or from big solar panels — that would be good for everybody. We won’t accept a dam on our Xingu River.

”If the Brazilian government doubted the steadfastness of the indigenous people’s position on this issue, it was quickly made clear that they are in no mood to compromise.The unlucky engineer sent by the state-owned energy company to defend the dam project misread his audience when he proceeded to give a long drawn-out address laced with technical terms and illustrated by a PowerPoint presentation. It was not received well, to say the least. In the most dramatic moment of the encounter, his speech was interrupted by a heated scuffle with members of the Kayapó tribe, who pushed him to the ground and lunged at him with their machetes. The engineer sustained a few cuts, and was stitched up at a local hospital before heading off on the next plane to Rio de Janeiro.

Needless to say, tensions were running high — for political reasons as well. The encounter took place only weeks after the resignation of Environmental Minister Marina Silva, who was widely seen as an aggressive defender of habitat conservation and responsible development in the Amazon and was constantly attacked in the press by powerful economic interests in Brazil.

“Her resignation is a sign for all of Brazilian society that the federal government is on the side of the those responsible for “predatory development,” says Dr. Felício Pontes, a federal prosecutor of Pará State and an outspoken opponent of the dam project. “That is, get rid of the Amazon to plant soy, to burn down the forest for cow herding, to dam the rivers for multinational corporations. It’s development at the cost of the forest and at the cost of the blood of the people who live here. Let it be clear that today the environmental movement in Brazil is against Lula’s government.

”The Amazon Basin covers half of Brazil and holds one-fifth of the world’s fresh water and 15 percent of all plant and animal species on earth. In a rapidly warming world, it is also a region that scientists say is absolutely essential to slowing climate change, since rainforests store vast amounts of carbon. For that reason and others, the Amazon has been called the “lungs of the planet.” Critics say that megadam projects will contribute even further to the urbanization of the region and will likely speed up the slash-and-burn agriculture that has made Brazil the fourth-largest emitter of greenhouse gases in the world.

The Amazon is also home to hundreds of thousands of indigenous Brazilians who are determined to defend their tribal lands, which while protected in the Brazilian constitution, are increasingly threatened on the ground by illegal logging, the encroachment of massive soy plantations and multi-billion-dollar hydroelectric projects like the Belo Monte Dam.

“We have so many cultures here in this part of the country, many diverse cultures but one shared objective — to defend a new model of development. Something that we take part in, not something that the government imposes on us,” says Antonia Melo da Silva, an organizer with the Foundation Live, Produce, and Preserve (FVPP). “Brazil is so rich with other sources of energy — solar, biomass, wind power,” Silva says. “That is the kind of development that would help the quality of life of rural people, of indigenous people. We need renewable energies that won’t destroy the environment and won’t privatize our waters. Many rivers have already been sacrificed. We won’t let our rivers in the Amazon be sacrificed as well.” 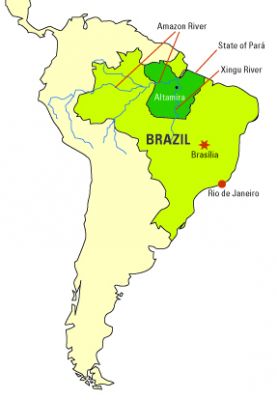 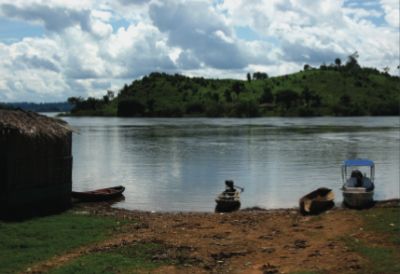 PRICELESS:While the Belo Monte Dam project would floodmany indigenous communities, others like the village of Resaca would be left high and dry if the Xingu River is diverted to service the dam. 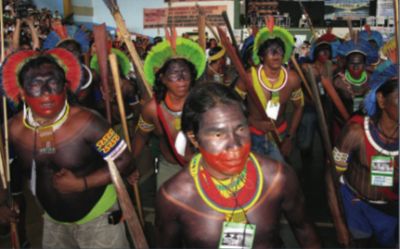 NO SURRENDER: During the gathering, indigenous groups entered and left each day with a dance and a chant. “The Amazon has a huge heart,” said one event participant,“ and everyone fits inside — the indigenous peoples, traditional populations, and more recent
immigrants. We are in this fight together.” 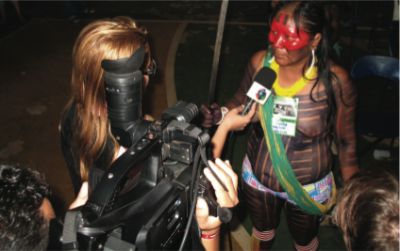 CULTURE CLASH: Machete-wielding Kayapó tribal leader Tuira Kayapó being interviewed at the Xingu Forever Alive Encounter in May. In 1989, she helped lead a campaign that successfully blocked government plans to dam the Xingu River. PHOTO: INTERNATIONALRIVERS.ORG 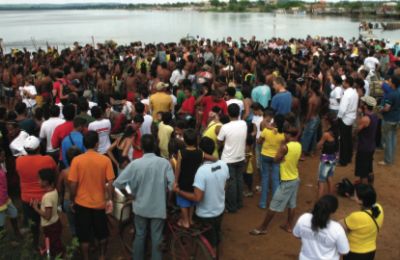 FINAL CEREMONIES: The closing rally for the encounter was held at the edge of the Xingu River. In a final declaration, the participants vowed to oppose all dam building. “Our culture, our spirituality, and our survival are deeply rooted in the Xingu, and we depend on it for our existence,” the declaration said. PHOTO: INTERNATIONALRIVERS.ORG

Joseph Huff-Hannon is a writer and producer with the Cultures of Resistance Network. For more information, see International Rivers.