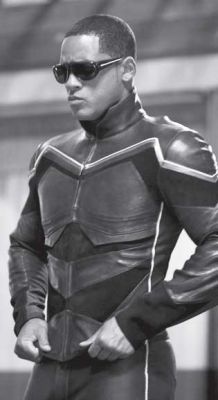 Like its title character, Hancock is best described as a mighty mess, which bursts forth uncontrollably, leaves myriad loose ends dangling and is attributable to an utter lack of pedigree. The first black blockbusting superhero, John Hancock is an ageless, all-powerful immortal adrift in a film that does not retool previously established narrative and iconic properties. He carries a lot of baggage, lacking both a sense of purpose and a history.

The opening moments of Hancock promise the bluesy flavor of Melvin van Peebles’ recent soul brother odyssey Confessions of a Ex-Doofus- Itchy Footed Mutha, an often inventively picaresque tale of self-styled heroics. Unlike van Peebles’ underachieving opportunist, though, there is nothing self-styled about Hancock. He is a flying contradiction. No matter if he chooses to be a boozing layabout who barks at kids, gropes women and wreaks havoc wherever he appears … he is still Will Smith.

Thus the first half of the film cruises along tongue-in-cheek, playing maladjusted superhero disrepute against affable superstar appeal. All Hancock needs to turn public opinion in his favor is a good publicist, and he finds goodness incarnate in Ray Embrey (Jason Bateman), an idealist trying to sell companies on a heart-labeled brand of selfless generosity. After Hancock saves his life, Ray rehabilitates the renegade crime-fighter into a responsible, well-groomed role model, and Hancock becomes L.A.’s guardian angel, decked out in an aerodynamic body suit, with an eagle as a mascot.

Meanwhile he continues to suffer the burden of solitude and a mysterious past, blocked off by loss of memory and invoked by the sole vestige of his ticket for a 1931 screening of Frankenstein. The past comes alive, though, through Hancock’s pursuit of Ray’s wife Mary (Charlize Theron), and once their shared lineage is made manifest, the film goes into overdrive, for better and worse. The Twilight of the Gods final act, set off by director, Peter Berg, barely contains the backstory of Hancock’s racist victimization as trauma that cannot speak its name.

The historical framing of the attack on him while he was out with a white woman, the depiction of an escaped convict seeking revenge against him, and the lynching iconography associated with the Frankenstein reference all insinuate the racial roots of his empowerment. Kudos to Hancock’s screenwriters Vincent Ngo and Vince Gilligan for tapping into this legacy, but would that they had done so less surreptitiously, especially given Berg’s bulldozing mode of plot advancement. In the same vein, Smith fails to break through his bummed-out, brooding intensity to a more sanguine dimension of acting; hopefully a project to come will bring out the bluesstyle performance he has in him.

Hancock’s resolution is so embarrassingly fatuous in glossing over any race-related impact that it borders on the reactionary. Wantonly naïve viewers could claim that this “happy ending,” like Smith’s persona, or the current election, transcends race, but it merely points up the elemental hysteria unleashed earlier — that “most profound panic,” in James Baldwin’s words, involved in the questioning of identity. Perched on its well-earned mayhem, Hancock is the most incongruous movie you’ll see all year, but also one of the more interesting.