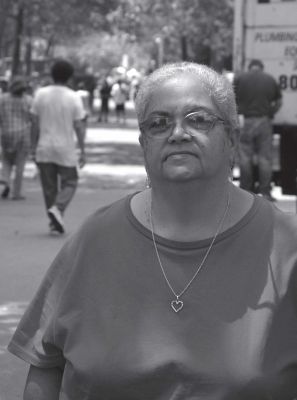 OUT OF STEP: Nisa Caraballo depends on a pedestrian pathway that runs between the Masaryk Towers to access her Lower East Side neighborhood. That path could soon be fenced off. Photo by Jamie Lehane

For 35 years, Nisa Caraballo has relied on the tree-lined path within the Masaryk Towers apartment complex to run her errands. From her Lower East Side apartment, she uses the walkway to see her sister who lives nearby on Pitt Street, to go to the grocery store and to visit her daughter.

“The walkway has always been open since I lived here,” Caraballo, 61, says.

But all of that might change. The 15-member Masaryk Towers Coop Board wants to gate off the complex, shutting out people like Caraballo who rely on the path to complete everyday tasks.

The walkway, a retired stretch of Rivington Street between Colombia and Pitt streets, links Masaryk Towers, a 1,110-unit Mitchell-Lama Co-op, with Manhattan’s largest low-income development, the Bernard M. Baruch Houses. Thousands of residents of the 17-building Baruch Houses complex use the path to access local services.

Masaryk Towers technically owns most of the walkway, but many area residents claim that it is public property. 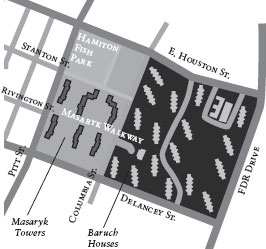 “A lot of old people walk through [here],” Caraballo explains. “They can’t afford to go around.” Caraballo points to her two new artificial knees. “I can’t walk that distance. I have to use my scooter.”

On a sunny afternoon, Caraballo plods along the path, pointing out the things that she will lose if Masaryk becomes a gated community. First, there’s the spot where a sparkling, toy-covered Christmas tree is displayed each year. Ahead of her, the community center that houses Grand Street Settlement, the organization that provides her neighborhood with early childhood education, meals to the elderly, and community programs, fills with elderly people.

Like Caraballo, others use the walkway to visit the community center. In fact, so many people use the pathway that Jessica Williamson, the public relations director of Grand Street Settlement, says enclosing the path could wipe out the 92-year-old organization.

“I think that people would feel really cut off from their business community,” Williamson says.

The Masaryk board tried to gate off the development two years ago, but community organizers collected hundreds of signatures opposing the proposal, and it was dropped.

In June, rumors began to circulate that the board intended to try again, and Grand Street Settlement joined with other local groups to form the Coalition for Safety Without Gates. It released a new petition in early July in support of public access through Masaryk.

Without access to the path, thousands of Baruch Houses residents will be forced to detour several blocks.

Caraballo says walking along Houston Street is unsafe due to heavy traffic and construction. And the other detour, Delancey Street under the Williamsburg Bridge, is often deserted. Further, Baruch Houses is considered a naturally occurring retirement community, meaning most people living there are more than 60 years old.

But young people will be affected, too. The walkway leads directly to Nathan Strauss Public School, two blocks west of Colombia Street. Students use the walkway to avoid East Houston Street and in the summertime kids congregate along the path to cool off in the shade.

In recent years, Masaryk residents have expressed concerns that an increase in youth presence along the path at night has led to a rise in crime. The Masaryk board cites crime and rising insurance costs as reasons for enclosing the development, but crime statistics have yet to be released, and local residents have questioned the utility of a gate in stopping crime.

Nonetheless, Caraballo says that she is scared walking the path at night. Her daughter, Nellie Flores, who has lived in Masaryk for 10 years, shares similar concerns.

“As a tenant, I understand why they want to do it,” Flores says. “Sometimes there’s fights that break out.”

But Flores still worries that the gate will prevent her mother from visiting. No one from the Masaryk board has asked her for input on the proposed project, and she does not know how a gated complex would change access to the building.

The Coalition for Safety Without Gates, however, suspects that the proposed gates are part of a development plan aimed at driving up property values. Fueling these concerns, Masaryk has been selected to receive a $6 million allotment from the federally funded Lower Manhattan Development Corporation (LMDC) for capital improvements, such as upgrading water and electrical systems. But to receive the money. Masaryk must first sign a 15-year agreement to remain in the Mitchell-Lama program. Three years have passed since the allotment, and Masaryk has made no such commitment.

Masaryk board spokesperson, Ed Kawolski could not be reached for comment.

According to Mike Murphy, the LMDC press secretary, the Masaryk board must submit a list of contractors and intended capital improvements to the complex before the money is awarded.

Caraballo has a few ideas about where to put the money. At the end of walk, she glances up and down the path, hands on hips. The asphalt below her is crumbling into jagged potholes. An old woman with a shopping bag pushes a walker over the sidewalk while three smirking boys skip past. “They should fix the street around here,” Caraballo says.

Caraballo shakes her head at the four 21-story Masaryk buildings before her and begins to recall the Rivington Street walkway before the complex was ever built.