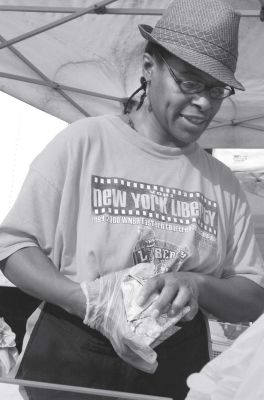 NOT BUSINESS AS USUAL: A Cato Corner Farm employee packages goat cheese July 12 for a customer at the Grand Army Plaza Farmers’ Market in Brooklyn. Like other vendors at city farmers markets, Cato Corner has been hard hit by soaring prices. Photo by Jamie Lehane

Local farmers in greenmarkets across New York are being squeezed from all sides by rising prices linked to oil and natural gas. Foremost, the cost of transport to market has gone up. James Kelseo of Tree Licious Orchards in Port Murray, N.J., says the cost of traveling to market has risen from $14 to $50 in only two years. But that is only the start. Bill Maxwell of Maxwell’s Homestead in Changewater, N.J., says, “There have been price spikes, quite dramatic spikes … Everybody’s worried.” The rise in petrochemical prices affects everything from packaging, animal feed and fertilizer to the electricity needed for cooling and heating.

Kelseo says the price of fertilizer, which utilizes natural gas, has doubled this past year, impacting livestock producers. Increased fertilizer and shipping costs have been compounded by widespread floods in Iowa, which destroyed up to 12 percent of this year’s grain crop according to the Iowa Farm Bureau, leading to the price of feed concentrate rocketing upward by “at least 35 percent,” according to Liz MacAlister of Cato Corner Farm in Colchester, Conn. For DiPaolo Turkey Farm in Trenton, N.J., the cost of feed has tripled. Laurent Danthine of Arcadian Pastures, an organic meat company in upstate New York, says he has raised prices by 10 percent to cover the jump in prices of both gas and animal feed.

Many local producers are trying to absorb the costs without raising prices. Patches of Star Dairy in Nazareth, Pa., says it has switched to cheaper packaging, which reduces shelf life. DiPaolo has kept most products at the same price but is increasing the price of whole turkeys by a dollar per pound, the largest increase the family-owned farm has made since 1947.

Shoppers at the Grand Army Plaza greenmarket have noticed the increases but say they are committed to supporting local farming. However, a source in the greenmarket program, which organizes the 45 markets in the city, told The Indypendent that business could decline 25 percent this year compared to 2007, the most successful year in the market’s history.

While greenmarkets and local farms are in no danger of disappearing, individual farmers face uncertain futures. A squeezing of margins makes unexpected costs hard to manage and may push some over the edge. David Graves, a bee-keeper and owner of Berkshire Berries in Becket, Mass., has a heart condition but cannot afford employees on his family-run farm. He says medical insurance and bills cost him $1,800 a month and he can’t afford to miss a market.