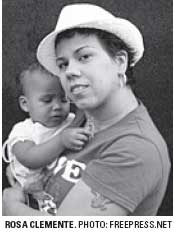 Green Party presidential nominee and former Georgia Congresswoman Cynthia McKinney announced July 9 that New York City’s own Rosa Clemente will be her vice-presidential running mate. Clemente, 36, was born in the South Bronx and is a graduate of the University at Albany-SUNY and Cornell University. A community organizer, hip-hop activist and independent journalist, she has written and reported for Democracy Now!, Clamor Magazine, Pacifica Radio, National Public Radio among other media outlets. She was also a lead organizer for the first National Hip-Hop Political Convention in 2004, which aimed to create a political agenda for the “hip-hop generation.”

In a written statement issued after her selection, Clemente said, “I don’t see the Green Party as an alternative; I see it as an imperative. I trust that my vice-presidential run will inspire all people, but especially young people of color, to recognize that we have more than two choices. Together, we can build the future we’ve been dreaming of.”

Her acceptance speech in Chicago at the July 12 Green Party Convention placed strong emphasis on the power of hip-hop to create change for social justice, saying, “I stand on the shoulders of a generation of young people of color that are united, that clearly understand that we are suffering from structural racism, institutional racism and capitalism.” Clemente, a Puerto Rican of African descent, and McKinney, an African-American, will make history as the first ever women of color presidential ticket for the Green Party.