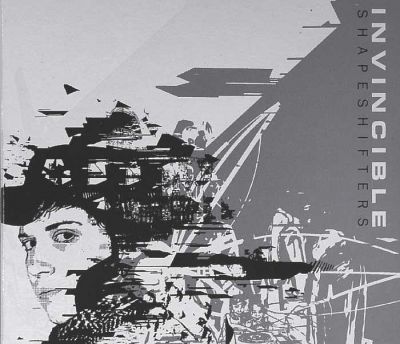 Getaway, high-speed chase/You lead the way/Round-up the DJ…/ On the model that the knowledge is within us/Make the cynical wake up/Shake the chemical makeup…/Time travel to the next art form we adapt to/Sample this resistance time capsule!” —Invincible, “ShapeShifters”

A century after Ford’s Model T, Detroit rolls out a very different product — grassroots hustle, not assembly line. Invincible’s first LP embodies her show-don’t-tell ethos: “Every sentence cinematic/Stretching the canvas/ Paint a picture of war like Guernica.” She’s a visionary in the literal sense, representing the day-to-day truth by yanking us out of the day-to- day mindset, inciting our capacity to perceive and recognize both what is and what could be.

The MC Invincible messes with futurism, taking the label “shapeshifter” to signal her versatility and her main theme on this record: the constant and vital dialectical interplay between the transformation of the self and the world. In his new book, Sound Unbound, DJ Spooky calls sampling “a story you are telling yourself — one made of the world as you hear it, and the theater of sounds that you invoke with those fragments is all one story made of many.” On the title track here, crate-digging and sampling are a literal concern, as well as a metaphor for how we situate ourselves between the future and the past, making some history of our own along the way.

To paraphrase the philosopher Toni Negri, an era’s dominant musical form mirrors the social organization imposed by capital. Berry Gordy’s tenure nailing upholstery at the Lincoln-Mercury car plant inspired his fervor for industrial efficiency and quality control that drove the Tamla Motown corporation; Iggy Pop’s sonic inspiration was the drill press. Invincible reps a post-industrial Ann Arbor and Detroit, a generation after the 1967 rebellion and the subsequent repressive onslaught and super-capitalist abandon. Her depictions of Ace Deuce and Motor City reflect an art of hustling and networking, marginalized people piecing things together patchwork and battling for public space.

Invincible doesn’t avoid the braggadocio and dissing you expect on a rapper’s debut. “Looongawaited” and “Sledgehammer” have the introduce-myself/payme- the-attention-I-deserve stuff, but also the watch-the-worldaround- you piece too, trying to raise everybody’s game from the jump, like Guru in 1988 in “Words I Manifest.”

Reflecting her community organizing with Detroit Summer’s Live Arts Media Project (LAMP) — her DS comrade Grace Lee Boggs drops a little knowledge on this disc too — a few of Invincible’s tracks tour the landscape, reflecting the despair and resilience of communities battling against gentrification for self-determination. You can peep the “docu-music video” for “Locusts,” featuring community images and voices, at emergencemusic.net, where you can also buy ShapeShifters.

We get another reality tour of displacement and struggle for land in “People Not Places,” flipping the script on Birthright Israel’s brainwashing of young Jews about this MC’s childhood home, featuring guest vocals from Palestinian R&B sensation Abeer (fresh from Jackie Salloum’s doc Slingshot Hip Hop). As with LAMP, Invincible’s work with the U.S.-Palestine Youth Solidarity Network enlightened her about oppression and resistance; on the flipside, she brings hip-hop’s creative utility to youth empowerment work.

Invincible links up diverse personal experiences, rhyming 194 to help you memorize the United Nations right-of-return resolution. Her metaphor of America as a deceitful, seductive lover in “Spacious Skies” — a chorus that cleverly twists a patriotic lyric, like Funkadelic’s “Groovallegiance” — is an impressionistic meditation on the U.S. empire at home and abroad. And “No Easy Answers” made me start planning a mixtape of hip-hop love songs.

The guests on ShapeShifters are most welcome, including the MC’s former crew, New York’s Anomolies; the producers have a sure hand. The tracks tend not to be based around recognizable pop songs — with the exception of one 1983 U.K. hit that has just begged to be sampled — but infectious instrumental loops and vocal hooks (and you gotta listen with headphones). Invincible’s vocal tone is original and warm, and she can flow staccato-quick as well as slowed-up syncopated, making you nod your head along in that way where you feel like you have to, to help the MC get each next syllable out.

Like Chuck D, Invincible can name-check the revolutionaries of 1968; more crucially, she’s learned the lessons of generation 1988, the era when Scarface, MC Lyte, Erick Sermon, MC Serch, Big Daddy Kane and others made records that raised the bar lyrically and musically, leaving influence and inspiration in their wake. Building in community with others, she’s finding her way in the space-time continuum: “My job’s to make the revolution irresistible/So listen close.”