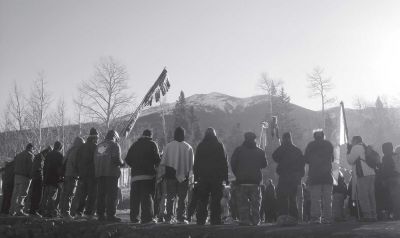 Arriving in Washington, D.C., July 11, after walking more than 8,000 miles along two routes from San Francisco, the Longest Walk 2 coalition, representing more than 100 Native American Nations, delivered a 30-page manifesto and list of demands to Congress, which included climate change mitigation, environmental sustainability, the protection of sacred sites, and items regarding Native American sovereignty and health.

“As we walked through this land we were horrified to see the extent in which Mother Earth has been raped, ravaged and exploited,” noted the Manifesto for Change.

The trek commemorates the 1978 Longest Walk, a similar campaign that led to the defeat of 11 anti-Native American bills pending in Congress and the passage of the American Indian Religious Freedom Act.

The long trek gathered firsthand accounts of how Nations are grappling with adverse affects of 500 years of colonization, borders, capitalism, environmental injustice and racism.

“We have witnessed the desecration of sacred sites by the United States government, corporations, developers and individual citizens,” said Jimbo Simmons, a Longest Walk 2 organizer.

Millions of Native Americans live on the front lines of U.S. energy policy and warefare, coping with the effects of the extraction, processing, and dumping of coal, natural gas and uranium.

Since 1940, it is estimated that more than 50 percent of all uranium extracted for nuclear energy and weapons has been mined from indigenous lands, leaving massive radioactive contamination.

The current debate about “clean coal” fails to address myriad environmental justice concerns regarding the toxic reality of coal mining, processing and burning. In the Navajo and Hopi Nations, the community continues to fight Peabody Coal’s strip mining, which has forced people off their ancestral lands, depleted a pristine aquifer and caused toxic spills.

“For over 500 years, those holding economic power backed with weaponry have imposed upon us their agenda,” says the Manifesto. “… there must be a systemic radical change so that those who pray the land and those who have lived on the land for thousands of years determine the destiny of their lands.”