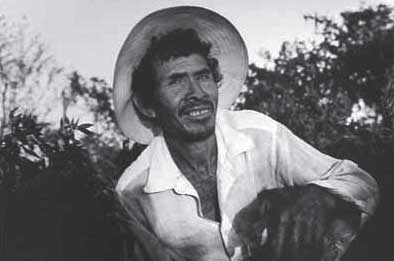 CAFTA Casualties: Free trade deals like CAFTA (Central American Free Trade Agreement) have had a devastating impact on El Salvador’s small farmers and have helped push 100,000 Salvadorans per year to immigrate to the United States.Photo by Judy Walgren, FAACA.NET

USULUTÁN, El Salvador—El Salvador is a poor country whose major export is people. From recently living there, I’ve seen firsthand what’s driving people north — and why conventional political solutions aren’t going to deter desperate Salvadorans and others like them from coming to the United States. Largely missing from this year’s presidential campaign is any serious reappraisal of our foreign, military, and trade policies that have forced millions of Latin Americans to uproot themselves and seek opportunities for a better life far from home.

In Iowa, Michigan and Ohio, free trade has fallen into disfavor because it threatens local manufacturing in economically depressed communities. As Lorri Brouer, a middle-aged Iowa Falls gift shop owner, asked a Boston Globe reporter in January: “Who’s going to turn off the lights when we grow old and die, because all the young people are going away?”

Brouer’s fearful refrain echoes in many small Salvadoran villages where the absence of people between the ages of 25 and 55 is often striking. In one remote farming community I visited in Usulután, the remaining peasants were struggling to survive by grazing cattle and growing beans and corn amid cycles of flooding and drought. Most had settled in the region after being displaced during El Salvador’s 12-year civil war. Some had served as combatants against the government forces, which received $4 billion in U.S. counterinsurgency aid during the 1980s. Because most village residents still support the left, the right-wing Republican Nationalist Alliance (ARENA) government of Antonio Elias Saca refuses to provide needed agricultural assistance and social services (which are made available to friendlier constituencies instead).

Parents of a large family I stayed with proudly showed me middle-school graduation photos of their two oldest children, but their pride was mixed with sadness and regret. Their children had both emigrated illegally to Houston after completing ninth grade, joining the 100,000 of their countrymen who flee every year. With few employment opportunities locally — and not many in the capital city of San Salvador either — the youth of the town “turn 14, and then they all leave,” the mother explained. She pointed to the picture of her daughter smiling in her cap and gown. “When we talk on the phone, she says she misses us. She cries and says she doesn’t like it there and wants to come home.”

This forced displacement of people — a human tragedy on a massive scale — is at the heart of the trade agreements. Enacted 15 years ago, NAFTA established a now-familiar regional pattern. It has allowed U.S. grain companies to dump cheap corn on the Mexican market, while at the same time, México was forced to cut its agricultural subsidies. Poor farmers in Oaxaca and Chiapas can no longer sell their crops at prices covering their production costs. So they’ve joined the stream of six million Mexicans seeking work in the United States.

The Salvadoran economist Alfonso Goitia sees the same phenomenon occurring in El Salvador, where 40 percent of the workforce is still employed in agriculture. Out of a total population of six million, 750,000 Salvadorans became political or economic exiles prior to the 1992 peace accords ending the civil war. Today, two million live in the U.S. because — under a series of ARENA governments over the last 15 years — El Salvador has embraced free trade, adopted the U.S. dollar as its currency, privatized public services, ratified CAFTA, and consigned a large percentage of the population to continued poverty and exploitation.

For those forced to seek work in urban areas, the choices aren’t good. In the manufacturing sector, jobs are concentrated in heavily guarded export zone factories with low wages, sweatshop working conditions, and union-busting transnational employers. An effort last summer by SUTTELL, the telephone workers’ union, to organize women assemblers at ABX Industries, an electronic component maker in San Bartolo, led to 30 of them being fired and then blacklisted. As is often the case, the human casualties of this campaign — when I met them in November — had been forced into the informal economy, joining the vast army of Salvadorans already peddling fruit, sneakers, toys, packaged snacks and home-made food items at rickety roadside stands and in crowded central market places throughout the country. One of the street vendors’ biggest product lines — pirated CDs and DVDs — is now making them a special target of local police, trained by the U.S.-financed International Law Enforcement Academy in San Salvador. Where the United States once aided and abetted death squads, it now spends millions of aid dollars orchestrating an attack on any would-be infringers on CAFTA-protected “intellectual property rights.”

Not surprisingly — given such a problematic urban and rural “job market”— I would regularly see large crowds of people at the American Embassy in San Salvador, waiting for hours with their documents in hand, to apply for some form of legal entry into the U.S.A.

When legal entry into the United States is thwarted, Salvadorans who can afford to sell any land they own, or take out personal loans, hire a coyote who charges $4,000 to $6,000 for unofficial immigration assistance. With or without such a “professional” guide, migrants are vulnerable to assault, theft and rape along the long overland route through Guatemala and Mexico.

Meanwhile back home, family disintegration is a major Salvadoran social problem. Departing mothers and fathers leave their children in the hands of grandparents and other relatives; some kids grow who up loosely supervised and feeling abandoned end up contributing to the country’s world-renowned “gang problem.” However, the remittances sent back — $3.3 billion in 2006, or 18 percent of the nation’s Gross Domestic Product — keep the economy afloat and operate as a huge social safety valve.

Despite increased repression (in the form of new laws making various forms of political protest potential “terrorist” acts), Salvadoran social movements are also stirring. Their goal when the leftist Farabundo Marti National Liberation Front (FMLN) challenges ARENA in next year’s presidential election, is to reclaim the idea of national economic development, fueled by much needed public investment. Unfortunately, very few North Americans currently share their understanding that publicly-funded job creation, agricultural assistance, workers’ rights, decent roads and schools, and other basic services are exactly what’s needed to keep far more Salvadorans in El Salvador, where most would much prefer to be.

Alexandra Early worked in El Salvador for CRISPAZ, a cross-border solidarity and social justice group. A longer version of this article originally appeared at counterpunch.org.