Officer Patrick Pogan must have wanted to show off to his colleague at the July 25 Critical Mass bike ride when he strode over and body-slammed Christopher Long off his bicycle. It was a little Friday night fun of the kind only enjoyed by New York’s Finest.

Long was then arrested and charged with assaulting an officer, resisting arrest and disorderly conduct before being released after 26 hours in jail. In his sworn criminal court complaint, Officer Pogan claimed that Long deliberately attacked him with his bike.

When the videotape shot by a tourist who happened to be standing on 7th Avenue, between 46th and 47th streets, went viral on YouTube, it not only raised questions about the honesty of one 22-year-old rookie cop, but also of the entire culture of dishonesty that pervades the New York Police Department.

Prosecutors work so closely on a day-to-day basis with the NYPD that they rarely expose officers whom they suspect to be lying; they just help them tailor their testimony. Hundreds of thousands of cases of police perjury occur every year in the United States, according to Harvard University law professor Alan Dershowitz, who calls the problem “pervasive.” A 1994 report by the Mollen Commission (headed by New York State Supreme Court Justice Milton Mollen) noted the same pattern of police “testifying” in New York — encouraged by police commanders and prosecutors, and condoned by judges.

In the mid-1990s, former NYPD Commissioner Howard Safir established a policy that an officer caught lying could be fired. But according to the Aug. 2 New York Times, of the 31 police officers formally accused of making false statements to the Civilian Complaint Review Board (CCRB) between 2003 and 2006, 25 of them were still on duty as of January. It was not known what became of the other six. None of the 31 dishonest cops have been referred to a criminal court, as they are not required to testify under oath at the CCRB.

While Christopher Long is likely to see his charges dropped in the coming weeks, it’s important to remember that the NYPD primarily targets Black and Latino communities whose members generally do not have the resources or activist networks to draw on that cyclists who participate in Critical Mass do.

Officer Pogan’s flagrantly false claims also raise new doubts about the testimony of killer cops who have been exonerated in the killings of Sean Bell, Timothy Stansbury, Khiel Coppin, Ousmane Zango, Amadou Diallo and countless other unarmed people of color.

For now, Officer Pogan has been taken off the streets and placed on desk duty. The City should fire him immediately. And if Manhattan District Attorney Robert Morgenthau wants to go further in cleansing a culture of police dishonesty, he can start by bringing Officer Pogan to trial on felony perjury charges. That’s the kind of crime-fighting zeal we need to see a lot more of. 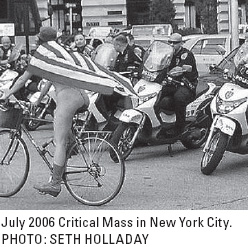 For more information, see “Rookie Cop Slams Cyclist,” by Renee Feltz in this issue of The Indypendent.