More a mirror on the world than a refuge from it, the Olympics have always been about more than gold medals. All eyes will be on China as many aim to use the spotlight of the Games to bring change. 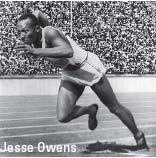 1936 BERLIN
Leading up to the 1936 Olympics, several years of widespread protests against the “Nazi games” took place in the United States, largely organized by religious, civil liberties, civil rights and labor groups. A proposed U.S. boycott of the games was narrowly defeated in a vote by the Amateur Athletic Union. African- American sprinter Jesse Owens, who at first supported a boycott, then went on to belie the Nazi belief in Aryan supremacy by winning four gold medals and breaking numerous Olympic and world records.

1956 MELBOURNE
The Melbourne Olympics heralded the era of national boycotts. Egypt, Lebanon and Iraq withdrew from the Games, protesting the British and French seizure by force of the Suez Canal crisis. The Netherlands, Spain and Switzerland also boycotted to protest the Soviet Union’s presence in the games, after Soviet troops crushed a revolt in Hungary that year.

1964 TOKYO
The International Olympic Committee (IOC) South Africa banned from the Games by due to its selection of athletes based on race. South Africa was invited to the 1968 Mexico Games, but international protests by athletes led to the invitation being revoked. (Rhodesia, now Zimbabwe, was expelled from the 1972 Munich Games for similar race-based practices).

1968 MEXICO
This was the first time a “developing” nation hosted the Olympics Games. Mexican President Gustavo Díaz Ordaz was determined to showcase the country’s economic boom and the virtues of his party, the Partido Revolucionario Institucional (PRI). In the months leading up to the games, against a backdrop of global protest movements, Mexican student groups, with broad public support, organized sustained protests for educational reform and democracy. The watershed moment, however, was the Tlatelolco Massacre Oct. 2, days before the games began, when the army and police opened fire on thousands of demonstrators and spectators, killing hundreds and arresting more than 2,000. The games continued unaffected and little media attention was given to the violence.

1972 MUNICH
Palestinian militants of the Black September Organization kill one Israeli athlete and take 11 others hostage, demanding the release of 234 prisoners held by Israel. Five gunmen and all of the hostages were killed in botched rescue attempt. The IOC temporarily suspended competition and held a memorial the next day. African-American Robert Taylor follows in the footsteps of Smith and Carlos by raising a Black Power salute after qualifying for the 100-meter finals. 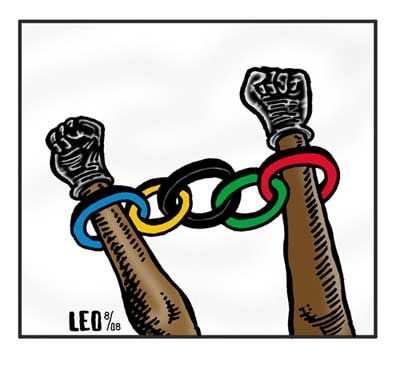 1988 CALGARY winter games
The Lubicon Lake Indian Nation, centered in Alberta Province, led protests along the Olympic torch route and a boycott by 30 international museums, that refused to lend artifacts for an Olympic display of Indian art sponsored by Royal Dutch Shell. The Lubicon Crees hoped to draw attention to the damaging effects of oil drilling, and other resource exploitation, on their land.

2000 SYDNEY
Some Aboriginal groups took the media-spotlight in the years leading up to the Olympics, promising to use the Games to highlight social conditions of indigenous Australians through massive protests. Fearing social unrest, Olympic organizers responded by reaching out to prominent Aboriginal leaders to include symbols of reconciliation in the opening ceremony. Cathy Freeman, an indigenous Australian who had refused calls to boycott the games, lit the Olympic flame to open the games. She then went on to win the 400-meter race, becoming a symbol of both the achievements of Aborigines and acceptance of indigenous people into mainstream Australian society. During the games, protests were fragmented and turnout was much lower than expected.

1.5 million:
Estimated number of people to have been relocated from their homes in Beijing in the last eight years to make room for Olympic facilities and “beautification” projects. (“One World, Whose Dream? Housing Rights Violations and the Beijing Olympic Games,” Centre On Housing Rights and Evictions, cohre.org)

30,000:
Number of surveillance cameras, some with microphones, that have been installed throughout Beijing. Capable of filming passers-by and recording conversations, they are designed to help the authorities identify suspicious behavior and locate suspects. (Reporters Without Borders, rsf.org)

None Reported:
Number of protests held demanding the United States be banned from the 2008 Olympics due to its illegal occupation of Iraq.

“ I just don’t see how you can separate the Olympics from politics. The Olympics is part of the world, period.”
—David Wallechinsky, Olympic expert and author of The Complete Book of the Olympics

“ We must stay, for freedom’s sake. … Some of my friends have already been arrested while others have been expelled from the capital. We are not wanted for any crime and we are not terrorists. The police are using archaic methods. ”
—Zhang Zuxian, a Beijing intellectual, who is one of many dissidents who have received threats by the Chinese government to leave the city during the Olympics