Twenty-three years after the worst chemical leak in Indian history, momentum is building — both in the streets and in top government circles — to enforce needed remediation and address tens of thousands of ailing victims. Documents recently uncovered by journalists show that the Indian government would require the U.S.-based corporation, Dow Chemical Company, to rehabilitate the Union Carbide disaster site in Bhopal as a condition for future investment in India. The Parliament appears poised to launch a special commission to take concrete action, however, hundreds of demonstrators have vowed to stay in the streets until the government keeps its word.

DEATH IN THE NIGHT

On the night of Dec. 2, 1984, 27 tons of lethal methyl isocyanate gas leaked from Union Carbide’s pesticide factory in Bhopal, India, immediately killing at least 3,000 people and up to 8,000 two-weeks later. Estimates of those still suffering adverse health effects range from 50,000, according to the Indian Council of Medical Research, to 150,000, according to the International Campaign for Justice (ICJB) in Bhopal. At the time, Union Carbide claimed that a leak of this size must have been committed by an experienced saboteur. However, when Bhopal residents learned that the safety systems were either broken or simply turned off to save money, they looked to the U.S. company for compensation.

Michigan-based Dow bought out Union Carbide in 2001 and has since refused to accept liability for the incident.

“There is no responsibility and no liability for the Bhopal tragedy,” said Scot Wheeler, Director of Communications for the Michigan-based company, in a New York Times article July 7. Bhopal residents cite U.S., Indian and international law to support their own claim that Dow, as the new 100 percent owner of Union Carbide, owns both its assets and liabilities.

…“It is this policy of double standards that caused the death and destruction in Bhopal,” said Shahid Noor, who was orphaned by the toxic gas leak.

While the legal battle continues, 425 tons of hazardous waste continue to saturate the soil, and seep down into the groundwater of the 11-acre contaminated site, poisoning current water supplies that affect thousands of residents.

In a move to put pressure on the government in February, 50 people marched 500 miles from Bhopal to New Delhi — the Indian capital — to start an indefinite protest and hunger strike. More than 800 people have now joined the demonstration. 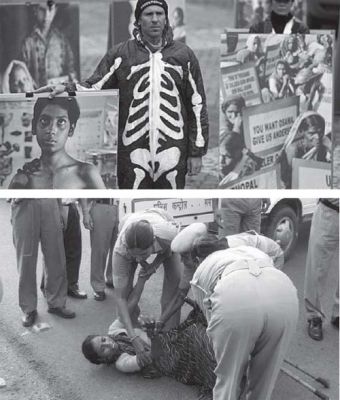 POISONED WITHOUT JUSTICE: (Top) On the 20th anniversary of the Bhopal industrial disaster in 2004, activists display images to demand justice. PHOTO: greenpeace.org (Above) More than 30 peaceful Bhopali demonstrators are arrested June 9, 2008, after carrying out a “die-in” in front of the Indian prime minister’s office. There have been ongoing protests since March in the hopes of forcing the government to hold Dow Chemical Company accountable for the 1984 massive chemical leak. PHOTO: bhopal.net

In a November 2006 letter to India’s ambassador to the United States, Dow CEO Andrew Liveris formally asked the government to waive any responsibility the company has to clean up the site. The letter was sent even as Dow looks to expand its investment and operations in India. Under the Indian Right to Information Act, journalists uncovered a document from the Prime Minister’s Office dated Feb. 7, 2008, that revealed the Indian government should in fact hold Liveris’ company liable. In the document, the

Law Ministry stated that, “Irrespective of the manner in which [Union Carbide] has merged or been acquired by Dow Chemicals, if there is any legal liability, it would have to be borne by Dow Chemicals.” The Prime Minister Dr. Manmohan Singh has yet to reply to the revealed document. Dow is already in a unfavorable position as they were caught bribing officials to let them sell illegal pesticides in India last year.

The strikers are not alone. Amnesty International is organizing solidarity events throughout North America and Europe. On July 14, alumni of the prestigious Indian Institute of Technology (IIT) also took action to force the school to refuse Dow’s corporate sponsorship of several of their campuses’ jubilee conferences. On July 26, a Dow research center in construction in the Indian village of Shinde Vasuli was vandalized and set on fire by the Warkaris, a radical environmental religious sect who defied authorities by videotaping themselves committing the arson. According to activists, Indian police are engaged in an aggressive crackdown in the village, arbitrarily arresting scores of local residents.

As the issue gained visibility in local and international press, the Indian Parliament drafted a bill which will empower a new commission to pursue rehabilitation in Bhopal. The Prime Minister formally announced the commission May 29, declaring that this group would “carry out medical, economic, social and environmental rehabilitation of the Bhopal gas victims,” but has been slow to hire staff. The ICJB is reviewing the draft and will suggest potential members.

AIMING FOR THE COURTROOM

Ultimately, the campaign hopes to force Dow’s Union Carbide Indian division to stand trial in Bhopal for culpable homicide. The Indian government has so far avoided accelerating the extradition of Union Carbide representatives to face trial in Bhopal. Many Indian businessmen and government officials outside of Bhopal are interested in attracting Dow investment even if they have to sacrifice Bhopal residents’ health. Commerce and Industry Minister Kamal Nath defended Dow’s position, saying that, “Dow themselves had no status in this, so Dow’s investment is not affected by that.” He continued to explain he was concerned about “sending an appropriate signal to Dow Chemical, which is exploring investing substantially in India.”

Meanwhile, the hunger strike continues in 24-hour rotations as campaign members promise to monitor the establishment of the commission, pursue court action that would force Dow to pay for a Bhopal cleanup and get the clean water project back on schedule.

Dow, meanwhile, continues to regain public support through its lavish “Human Element” campaign. Dow has spared no expense, hiring public relations giants GolinHarris and Draft FCB at a cost of $8 million in 2006 to “re-brand” their corporate image to that of social responsibility. Meanwhile, they are aggressively at work to extinguish remaining legal claims in both India and the United States.