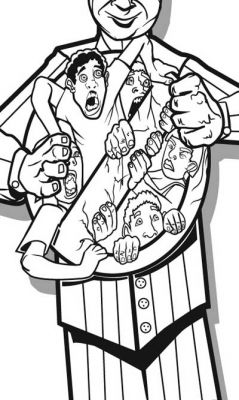 With a multi-colored dragon tattoo emblazoned on his left arm, housing organizer Matt Wade calmly stepped atop a crumpled milk crate and hollered to all those assembled in front of the Goddard Riverside Community Center, an Upper West Side high rise on July 20: “New York needs housing, bring it back, put your workers back on staff.”

He was speaking to a crowd of single room occupancy (SRO) tenants, housing advocates and union members who had gathered to support Wade, a housing organizer, and attorney Ryan Napoli. The two were recently laid off by their employer, the West Side SRO Law Project, due to city budget cuts.

The SRO Law Project is part of the Goddard Riverside Community Center, a sprawling social services organization based in New York City. Goddard’s management cut the two positions in response to deep cuts to city-wide legal services providers.“We are here to both protect the rights of union workers, as well as the tenants they represent. We ask everyone in power to maintain our level of services,” said Yarrow Willman-Cole, a SRO Law Project housing organizer. The employees at SRO Law Project are represented by the National Organization of Legal Service Workers, United Auto Workers Local 2320.

Unfortunately, the city budget cuts may make the Goddard Riverside battle only the first front of a broader struggle to provide needy tenants with legal support. City-wide anti-eviction and SRO legal services will see a 25 percent cut, a loss of $750,000 of annual resources. The Legal Services for the Working Poor coalition, comprised of four smaller legal services organizations, is taking a 42 percent hit.

While Goddard Riverside management claims that layoffs are a necessary response to the economic downturn and diminished city funding, the union asserting that management has not acted in good economic faith and opened its books to justify the layoffs. In particular, there is contention surrounding Goddard Riverside’s $10.7 million endowment as of fiscal year 2006, a small portion of which could be used to retain their frontline staff.

“Without the support of the West Side SRO Law Project, we wouldn’t have even known where to start fighting our landlord,” said West Side tenant Vivian Riffelmacher. Riffelmacher told of how the new management of her building began operating an illegal hotel business out of her building in 2004, and praised the support of the SRO Law Project in helping her tenant association successfully litigate the matter.

West Side SRO Law Project management was unavailable for comment.

Perhaps the most impassioned speech came from Deepa Varma, a SRO Law Project staff attorney, who listed the types of cases the organization has had to turn away in the first week in August because of the layoffs. She mentioned a tenant with a degenerative brain disease who lost her job and was in the hospital when her eviction case went to court, increasing the likelihood she will lose her case because she did not have legal representation. In another case, she described a tenant who got kicked out of his home of 10 years when it was illegally converted to a hotel.

“Without the layoffs, we could have taken all these cases and won,” claimed Varma. “Now, we can do nothing to help.”